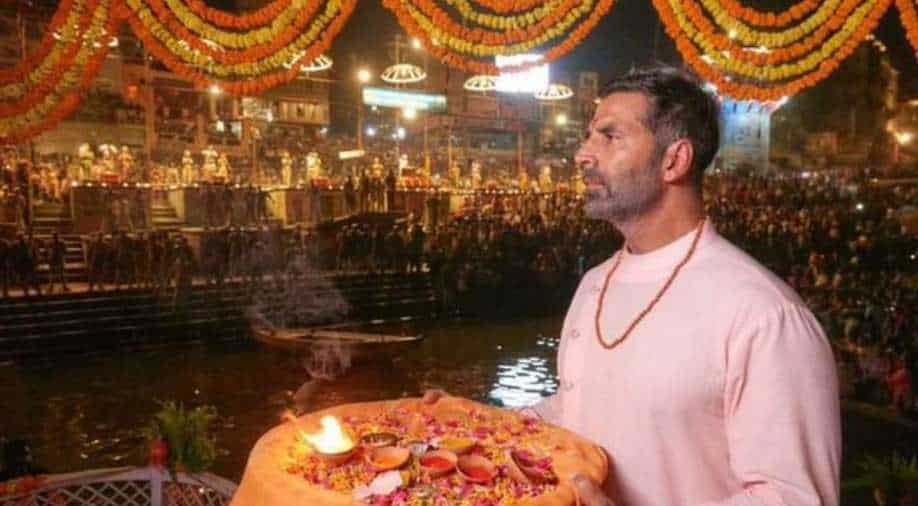 Bollywood superstar Akshay Kumar took a dip in the Ganges on Monday evening in Varanasi during a promotional event of his upcoming film 'Samrat Prithviraj'. Kumar was in holy city to promote the film along with debutant and former Miss World Manushi Chhillar.

In a video that is being circulated on social media, the actor could be seen joining his hands above his head before springing into the waters of Varanasi.

It seemed that Akshay Kumar enjoyed his little swim as he opted for a short backstroke in the grey waters, surrounded by hues of yellow light.

Taking to his Instagram handle, Akshay Kumar shared a picture of himself wearing a light pink coloured kurta with a prayer bead around his neck. He was seen holding a prayer plate in his hands with diyas and flowers in it.

The picture revealed Akshay Kumar was at bank of the river Ganges which is considered holy among Hindus. Kumar and Chhillar were surrounded by throngs of people at the bank.

Debutante, Manushi Chillar also shared a string of pictures on her Instagram. She opted for a minimalistic look with a baby pink coloured, embroidered Kurti with a dupatta. A studded pair of pearl earrings and a nude lipstick shade complimented her looks. Manushi had her hair tied up in a loose bun.

In one of her pictures, Manushi was seen praying, folding her hands, with her eyes closed in devotion. A crowd of people were witnessed behind her in boats as well as on the ghats. In another picture, the 2017 Miss World and Akshay Kumar held the prayer plate together with a priest helping them with offering their prayers. Manushi had her million-dollar smile on her face while Akshay had sported a sturdy look.