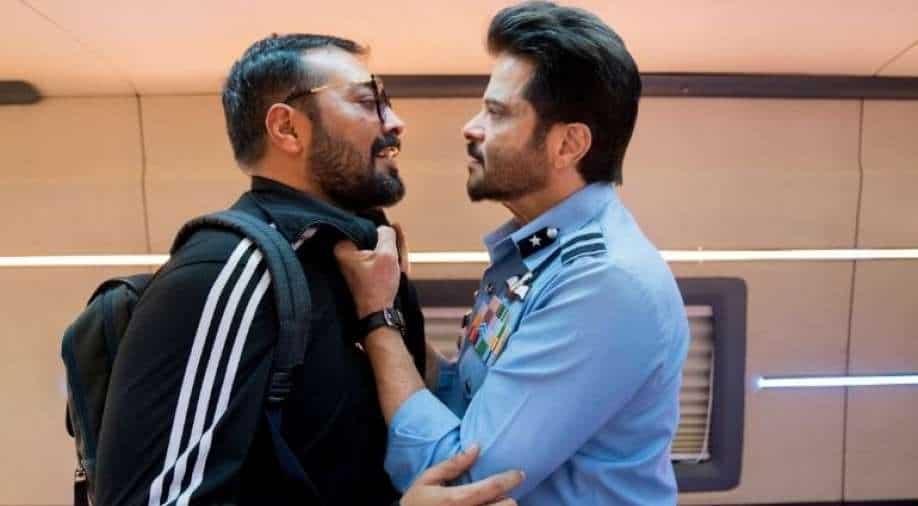 Still from 'AK vs AK' via Netflix Photograph:( Others )

in 'AK vs AK' , Anil Kapoor and Anurag Kashyap play themselves in a fictional movie.

This is perhaps the most experimental a Bollywood film can ever be. A well known actor and director will play themselves in a fictional movie. A day after Anurag Kashyap and Anil Kapoor engaged in an argument on Twitter, the trailer of their latest film 'AK vs AK' was released which shows Anurag Kashyap kidnapping Anil Kapoor's daughter Sonam and how the actor goes on a wild goose chaise looking for her while being followed by cameras.

The trailer begins with Anil and Anurag fighting during an interview on stage. Things get heated up and Anurag ends up throwing a glass of water on Anil`s face. Then he kidnaps Anil`s daughter Sonam. Anil gets 10 hours to search for his daughter but there are rules that he has to follow. As Anil hits the streets searching for his daughter, the director captures everything on camera.

During a virtual press conference on Monday, Anurag and Anil released two more trailers of the Vikramaditya Motwane directorial.

The one unveiled by Anil shows him making fun of Anurag`s work and calling Anurag "biggest fraud in the industry" and a "wannabe Tarantino".

We are live from the press con from #AKvsAK. Keeping the best interests of the film in mind, I am releasing this trailer but this isn't what I had signed up for. It’s okay for now. But I’ll have my team release another one. The REAL trailer for Ak vs AK. https://t.co/u19VecbVIm

The third trailer released by Anurag has him saying that film is a director`s medium. Anil is also seen asking Anurag to make a film with him, but he does not seem to be interested in working with "Anil uncle".

Have been getting calls and messages that there have been rumours about the recent developments in the promotions of #AkvsAk. I am not bothered by petty trolls and Bollywood bullies. I always say believe what you see.https://t.co/U5hZpT0eeQ

Directed by Vikramaditya Motwane, the film will also feature Anil's son Harshvardhan. 'AK vs AK' will release on Netflix on December 24.