Still from 'AK vs AK' via Netflix Photograph:( Others )

Reality and fiction often get interlinked and for an Indian audience which is easily hurt by slightest of the issues, 'AK vs AK' is a tricky film to execute convincingly. Does the team succeed? To a great extent.

It can be safely said that no actor in Bollywood has reinvented himself as well as Anil Kapoor has done. In a career spanning over four decades, Kapoor has experimented with genres, roles and even a different industry. Vikramaditya Motwane's 'AK vs AK' is perhaps Kapoor's boldest experiment on the screen so far.

A meta-war featuring Anurag Kashyap and Kapoor playing themselves, the film is innovative in its approach and something that Indian audience is not used to watching on screen. Reality and fiction often get interlinked and for an Indian audience which is easily hurt by slightest of the issues, 'AK vs AK' is a tricky film to execute convincingly. Does the team succeed? To a great extent.

There has already been a bit of controversy involving Kapoor's costume and IAF and the film starts with a disclaimer about fiction and reality and how the makers hold the Indian Airforce in the highest of the regards. Soon after the messaging is done, the film dives straight into MAMI 2019 where Anil Kapoor and filmmaker Anurag Kashyap are co-panelists for a masterclass.

The session soon becomes ugly with Kashyap throwing a glass of water on Kapoor's face in a fit of rage. The scores are not settled though as Kashyap devises a dangerous plot to get back at Kapoor. The filmmaker kidnaps Kapoor's actress daughter Sonam and then asks the veteran star to look for her in Mumbai without any help and before sunrise. Kapoor goes on a while goose chase with Kashyap following him with a camera person to make a film out of the entire episode. 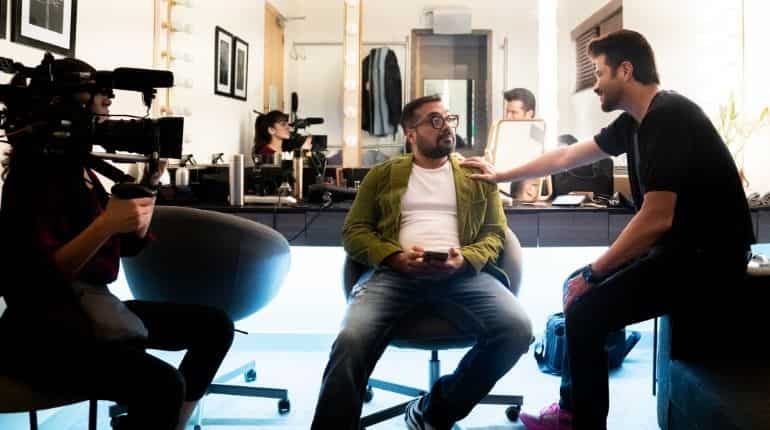 Motwane and writer Avinash Sampath borrow heavily from the real life of both the AKs and shoot in actual locations. There are cameos by Kapoor's family members like Boney Kapoor, Sonam Kapoor and son Harshvardhan. Locations are streets of Mumbai and both the stars home. All these elements blur the lines between real and fiction to a great extent.

While the film begins on an exhilarating high, the film runs its course soon after. The narrative is immersive and innovative but slightly incoherent. What stands out is Kashyap and Kapoor trying to outdo each other in every possible way- some look natural while a few scenes look hammy.

As Kapoor goes on streets, looking for his missing daughter, he transforms into one of the daredevil characters he has played in innumerable films in the past. Nothing can stop him from finding his daughter. He gets hit by a car, gets embroiled in a scuffle with Kashyap, runs for miles- but seems tireless as he keeps the search on. He is bleeding and panting but still not willing to give up.

The film begins on an exhilarating high. The two actors are shown to be at loggerheads with Kashyap playing a mad, deranged and vindictive version of himself to Kapoor's helpless, anguished version. But soon enough the chase becomes repetitive. There is a portion where Kapoor, in a bid to look for a taxi driver, ends up at a local Christmas fair. Battered, bruised and bleeding he goes up on stage to seek help in looking for the driver who is believed to be a local of that area. As he takes on the mic and pleads for help, the crowd insist on him first performing to some of his hits. While the idea is to show how the general population is insensitive and blind to other's problems, the scene still seems out of place, unrealistic and forced into the narrative.

Inconsistent and incoherent - the last half hour of the film is a stretch and one can see that the maker and the writer have lost the grip from the storyline. I wish they had edited a major chunk off from the climax. It's messy and chaotic and both Kashyap and Kapoor overdo their bit.
'AK vs AK' ultimately suffers due to some glaring flaws. What begins as an enjoyable film about two well known Bollywood faces being pitted against each other, ultimately becomes stretched and chaotic by the end. Sure there are a few genuinely funny moments in the film courtesy Kashyap and his maverick ways. It's also interesting to watch Kapoor's family members playing small bits but 'AK vs AK'  is audacious, experimental which can tire you out, unlike its two AKs.