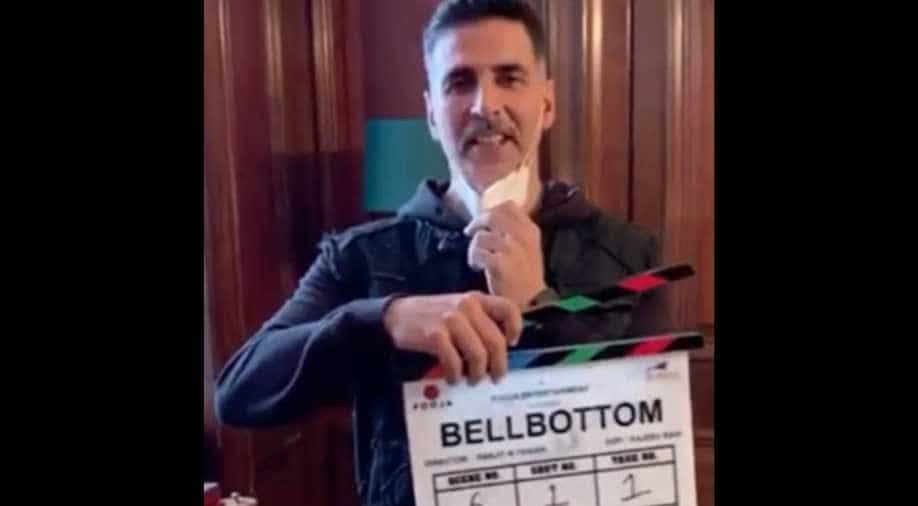 Vaani Kapoor stars along with Huma Qureshi, Lara Dutt and others in the film.

Akshay Kumar is one of the first few Bollywood actors who has resumed work on his upcoming films in COVID-19 time. Starting off with ‘Bell Bottom’, the actor flew out of India for the UK for the filming.

Now sharing a glimpse of the shoot, Akshay shared a sneak peek into the film’s shoot diaries. He wrote that the shoot is complying with “all the new norms” amid the pandemic. He wrote, "Lights, camera, mask on and action. Following all the new norms and filming on for #BellBottom! It's a difficult time but work has to go on. Need your love and luck."

The makers of ‘Bell Bottom’ will shoot the first schedule of the film in London. Earlier in the day, Lara Dutta shared a picture from the sets of the film. She can be seen wearing a mask in the picture, which also features her team members. "And it begins. I'm claiming one for the girls. As a 42-year-old female actor, in this COVID period, it feels amazing to be the first to be back on set of a big Bollywood film. Thank you Pooja Entertainment for creating a safe environment for us," the actress wrote in the caption.

And it begins!!! I’m claiming one for the girls! 💪🏼💪🏼. As a 42 year old female actor, in this Covid period, it feels AMAZING to be the first to be back on set of a big Bollywood film!! Thankyou @pooja_ent for creating a safe environment for us 🙏. #BellBottom @akshaykumar @ranjitmtewari @iamhumaq @_vaanikapoor_ @deepshikhadeshmukh @jackkybhagnani