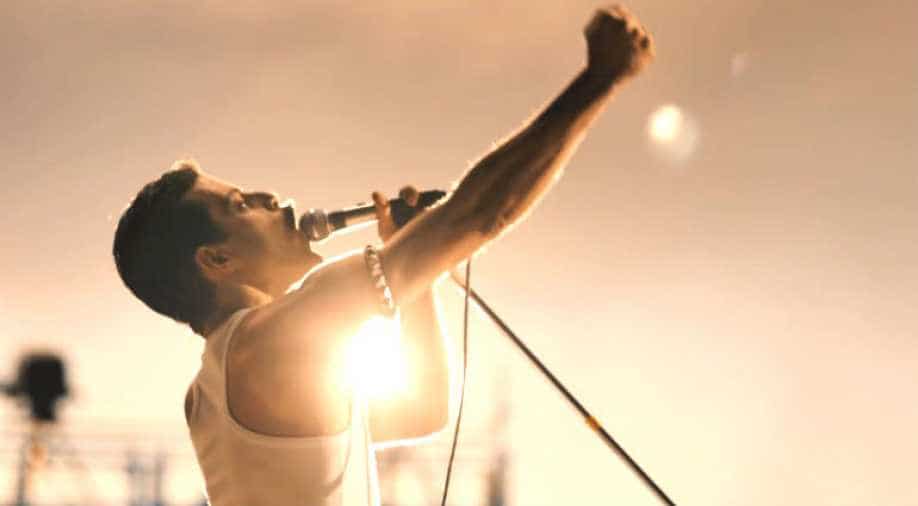 That last 20 minutes at the Wembley sort of redeems the films to a great extent as it is exhilarating to watch the iconic band and the mad genius called Freddie Mercury come alive one more time, not on stage but on the big screen.

He may have died before many of us were even born, but life and times of Freddie Mercury and his band Queen has for decades influenced generations of musicians. So it was just fitting to give the man a tribute, nearly three decades after his death with a film that celebrates the mad genius in all his glory.

Directed by Bryan Singer, 'Bohemian Rhapsody' from the beginning makes it clear that the story is about how Bulsara, a Parsi boy from India, who became a humungous star and one of the most relevant faces of pop culture in the 1970s and 1980s. A film that not just portrays Mercury the star and his eccentricities but also tries to delve deeper into the human side of a rather complex personality at large.

The film opens with the historic Live Aid concert of July 1985 and concludes with it as well. As we travel back in time, we see the birth of a superstar singer from the bylanes of London. Parsi-Indian boy Farrokh Bulsara is a college boy who also works as a baggage handler at Heathrow Airport and writes songs in his free time. He is different, has buck tooth, desperately trying to move away from his lineage and adapt to the British ways when one night he meets Brian May and Roger Taylor- bassist and drummer of a local band that Bulsara often listens to. May and Taylor are in need of a lead singer and Freddie in his own way convince them that he is the right man for them. And that's how a small band, eventually gets rechristened as 'Queen' and goes on to create recording history in the world of rock and roll.

The film, much like Mercury's tumultuous personal life, went through a lot of changes. Bryan Singer had shot almost 75% of the film when he was fired from the project owing to long absences and differences with cast and crew and Dexter Fletcher had to eventually step in to complete the project. The changes in the director's post are evident in the way the film has been put together.

While it begins on a high note, the film pace massively slackens in the middle with the screenplay giving too much attention to Mercury's rise and fall juxtaposed with multiple hits by the band, playing the background. And it isn't that the biopic really reveals anything that is already not known. A lot of the things that are depicted in the film about Mercury's rise, fall, and redemptive rise again is already there on the pages of history and well on the Internet. A biopic ideally should give an insight into unknown aspects of a celebrity it is based on. Mercury's rise, his eccentricities, the love he had for Mary Austin, his downfall and him contracting AIDS- is already there on his Wikipedia page. The film could perhaps have then dealt a bit more about his relationship with his family, his earlier years and given more insights into how some of the cult songs came into inception.

The songs are all there, though. And all of them are absolutely splendid, naturally. But a lot of the hits are just thrown into the narrative, without any background given.

The film is about Freddie Mercury and actor Rami Malek completely owns the part. From adding the buck teeth to getting his mannerisms right, Malek owns every scene and makes his performance memorable.

There are parts in the film, that appear to have been hastily put together- owing to flimsy editing. The final 20 minutes of the film are the most crucial and is brilliantly put together where the band comes together- after a long gap- to perform to a packed audience at the Live Aid concert at Wembley Stadium. A lot of the footage of that concert is available online, and makers use it to their advantage and get Malek and rest of the cast to act out exactly how it was on stage.

That last 20 minutes at the Wembley sort of redeems the films to a great extent as it is exhilarating to watch the iconic band and the mad genius called Freddie Mercury come alive one more time, not on stage but on the big screen.

Should you be watching 'Bohemian Rhapsody'? Yes, if you are still not aware of Freddie Mercury and his immense talent. If you are a die-hard fan, you might already know what's happening on screen, but then the songs will help you go back in time and that itself should be a good enough reason to watch it.