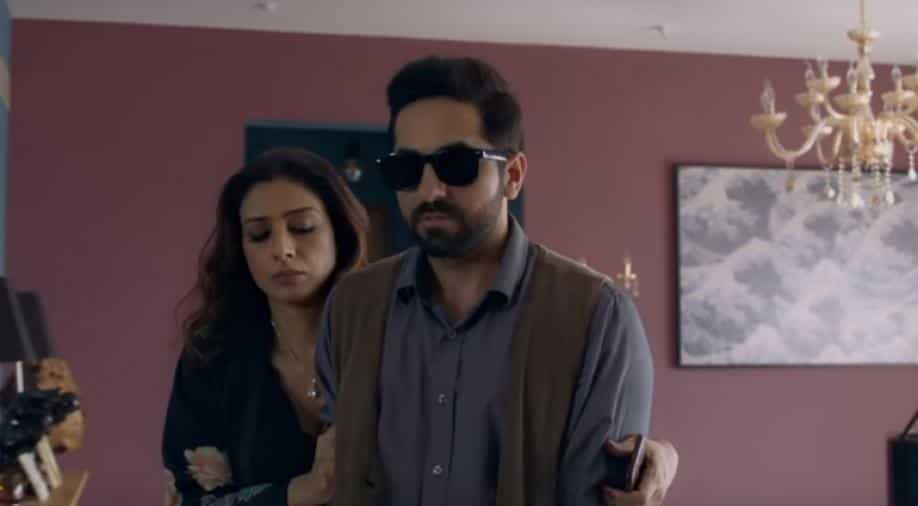 There is a certain beauty in the chaos that spills on screen in a Sriram Raghavan film. As a blind man plays out a beautiful tune on the piano inside a plus apartment, two people clean up the evidence of a murder that has happened moments before. The blood on the floor is cleaned up with a mop, the body is stuffed into a bag, broken glass pieces are cleared out- and amid all the chaos, the pianist continues to play. There is a certain sense of urgency, a sense of anticipation at all that's happening on the screen, yet the piano has a calming effect.

Raghavan, one of the finest filmmakers of our times, always knows how to keep the curiosity level high. His film need not be whodunnit always, but he has aced the thriller genre simple by keeping the audience hooked as what will happen to his characters next. His latest, 'Andhadhun' is not different, where a blind pianist finds himself embroiled in a murder mystery.

Ayushman Khurrana plays Akaash, a blind pianist who had gifted fingers and plays the piano like a dream. He lands a gig for himself at Pune's hip restaurant Franco and also falls in love with the owner's daughter Sofie, (Radhika Apte). A regular patron of the restaurant, yesteryear's actor Pramod Sinha (Anil Dhawan) asks him to come home on his anniversary and play for his wife Simi (Tabu). It's only when Akaash reaches Sinha's home, does he realize that a murder has happened.

Raghavan's taut thriller has twists in abundance, with no character completely black or white. Everyone has a motive, and everyone is unpredictable. They don't always do what they say, so after a point, you keep anticipating for the next twist. It's interesting how Raghavan first surprises you with the twists, (I found myself gaping in shock twice in the first half), and then by the time you get used to that fact the narrative has surprises in store for you, you start anticipating the next twist making the entire film extremely engrossing.

The film not only has an engaging plot, but the star cast is superb. There are of course the leads- Ayushmann Khurrana, Tabu, Radhika Apte- who are perfectly cast in their roles, but it also has a superb supporting cast. Be it Hussain as the 'nice' doctor who smuggles organs, or Manav Vij who plays the cop who is at wrong places at the wrong time, or the child actor- Kabir Sajid, who is always suspicious of Akaash- each of the actors are well suited to their characters.

Leading man Ayushmann Khurrana, who has now become the poster boy of slice-of-life films, attempts a thriller for the first time and does justice to it. Khurrana's choice of films is always unique making him the ideal actor along with Rajkummar Rao to play the regular guy. His Akaash is not a very simple, straightforward guy and he knows how to manipulate people around him. Khurrana delivers a restraint performance- a stark contrast from the typical north Indian boy we are used to seeing in play on the big screen. Khurrana is pitch perfect as Akaash.

Radhika Apte who plays his lady love brings her effervescent charm but has limited screen time which is a bit disappointing. We have seen Apte off late in such powerful roles, that one excepts all her in great characters in all her films.

The film, though belongs to Tabu who channels her inner Lady Macbeth, infuses drama, vulnerability and certain quirk to her character making Simi a very interesting character on screen. You enjoy watching Simi plot evil plans, you laugh out when she plays coy. It is so good to see the actress in a role that lets her perform to her hilt and she doesn't disappoint.

Had the second half been a bit shorter, the film would have been so much more fun but I am willing to ignore that bit because of Raghavan's style of storytelling triumphs over these flaws.

A word on the screenplay where Raghavan, true to his style, uses old Hindi numbers in crucial points of the narrative making it pertinent to the story and thoroughly enjoyable.

Watch 'Andhadhun' for Tabu and Ayushmann and watch it for the incredible Sriram Raghavan who always knows how to keep you on the edge always.