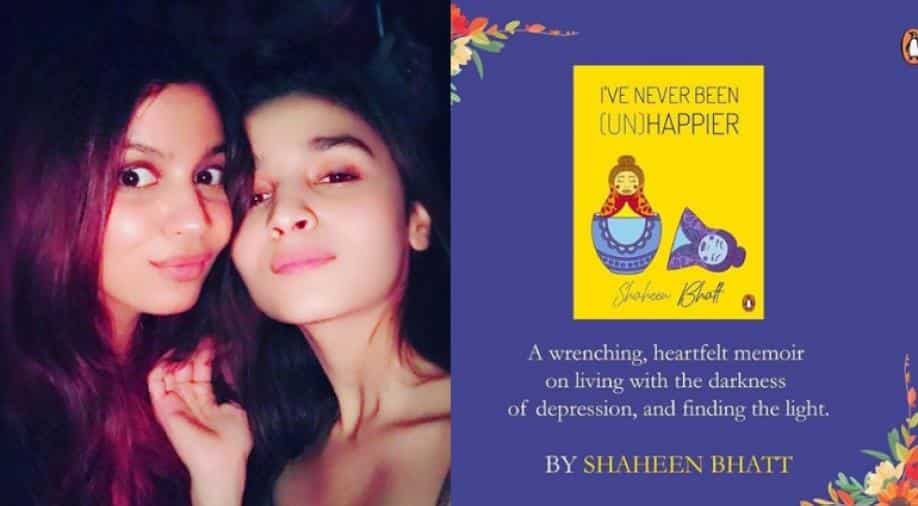 'I feel terrible because despite living with you for 25 years, I have never really understood your silent moments of depression. I never recognized a snappy moment as something much bigger,' said Alia. Shaheen's book is called 'I've Never Been (Un)happier'.

Alia Bhatt recently shared an overwhelming message for Shaheen Bhatt on the release of her debut book 'I've Never Been (Un)happier'.

Alia, who went through the story that Shaheen has penned, was overwhelmed and shared a heartwarming message for her on Youtube.

In the video, she said, "When I come home after a long day at work or I am just sulking because of life, just one look at your older but still sparkling brown eyes just lights up my heart like you can`t imagine."

Alia also spoke on Shaheen's problem of depression and said, "When I read your very first book, a book that you have written with so much ease and honesty, while I struggle to write one letter to you. I feel awful.

I feel terrible because despite living with you for 25 years, I have never really understood your silent moments of depression. I never recognized a snappy moment as something much bigger."

"Every time you refused to go out for dinner, I would think she rather sit at home and watch TV, be alone, not that you couldn`t bring yourself to get out of bed," she added.

Thanking her sister for educating her about depression, Alia also thanked sister Shaheen for sharing the problem of depression and said, "Today you have connected to me on a basic, human level. And you have taught me so much more about life."In the end, she also apologised for not being able to understand Shaheen and said, "I know you hate the fact that we all are saying sorry to you, but take the apology because even though we love you, I don`t think we understood what you were going through, to this extent."

Shaheen Bhatt had shared her debut book 'I've never been (un) happier' on 'World Mental Health Day' that deals with her battles with depression.