Watch: 'Don't try this at home' says man who injects himself with snake venom 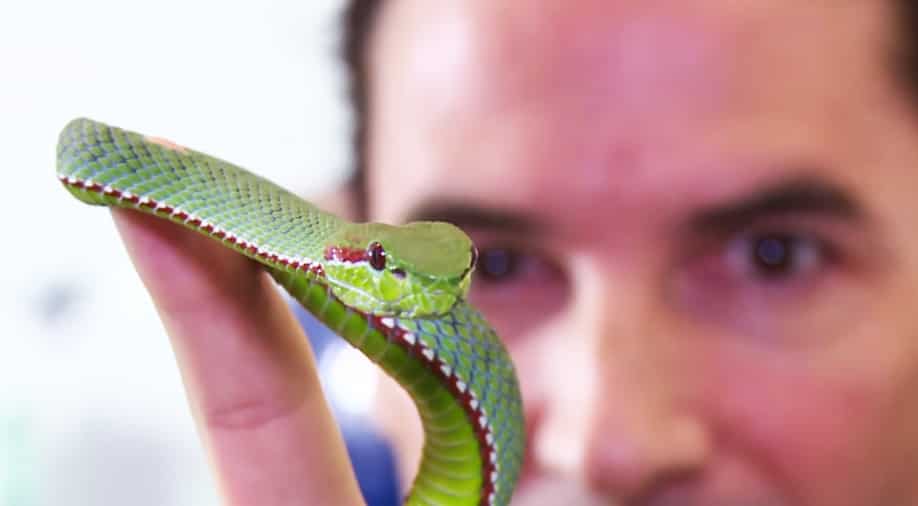 "You don't trip -- it's extreme pain" - The man who injects himself with snake venom https://t.co/i1NtYaBFkA pic.twitter.com/G73E8Pr1JY

For nearly 30 years, London-based reptile enthusiast and musician Steve Ludwin has been injecting snake venom -- a practice that has almost killed him.

It may now help save thousands of lives, as researchers search for a new antidote based on his body's response to the toxic fluids.

Ludwin demonstrated his decades-old habit by firmly holding the head of a green Pope's tree viper - Trimeresurus popeiorum - and extracting a few drops of its venom.

Minutes later, he has injected the fluid into his arm using a syringe.

Over the years Ludwin has injected the venom of some of the world's most dangerous snakes, including the black mamba and cobras.

He claimed it has strengthened his immune system so much he has not suffered from a cold in 15 years.

But it has not been all positive.

"I have had quite a few accidents", Ludwin said, recalling he once ended up in a London hospital's intensive care unit for three days following an overdose.

"It's a very very dangerous thing to do, I don't encourage people to do it".

Ludwin's unique behaviour is the subject of a short film at a new exhibition on venom opening at London's Natural History Museum on Friday.

His habit has taken on new meaning in recent years after a team of researchers at the University of Copenhagen embarked on producing an anti-venom using his antibodies.

"When he injects venom, his immune system responds," Brian Lohse, a professor at the faculty of health and medical sciences at the University of Copenhagen, said in a phone interview.

"What we expect is to find copies of his antibodies, isolate them, test them, and eventually set up a production of them."

Four full-time researchers, who began work in 2013, expect to complete the project within a year.

If successful, it would be the first human-derived anti-venom made from a donor who has injected himself with different snake venoms.

Antidotes to date have been harnessed by collecting antibodies from animals, usually horses, that have been given venom.

"Our anti-venoms are aimed to cost a hundred dollars and we hope to make it freely available in countries where people are bitten every day and people die every day," he added.

Lohse said he hopes to distribute the new anti-venom free of charge with the support of governments or non-profit organisations.

According to the World Health Organisation, snake bites are a "neglected" public health issue.

Although Lohse values the indispensable part Ludwin has played in the venture, he has reservations about his habit.

"Science, and perhaps future snake bite victims, can express their gratitude towards Steve's endeavours, but on the other side it's very dangerous to do self-immunisation," he said.

"Steve has been in serious danger several times, therefore I would strongly discourage anybody to do what Steve has done."