Konversations: How can she go from a caregiver to a disruptor? 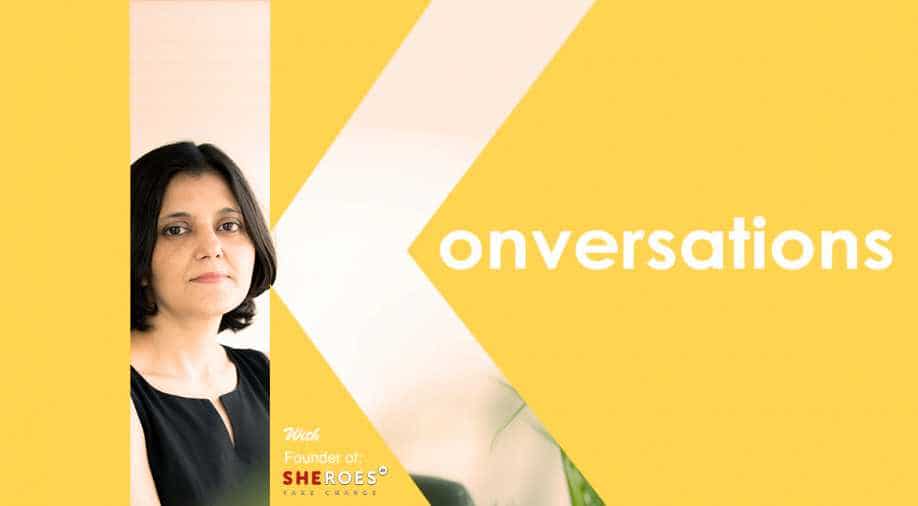 'The role of women is changing from nurturers and caregivers to disruptors, creators and growth hackers' (Graphic by Ishu Vaid) Photograph:( WION )

According to a United Nations study, only 50 per cent of women are in the workforce, compared to 77 per cent of men. The numbers in India are much lower.

"Where are the working women? Do they doubt their own skills or is it the fear of affecting their families? Do women in India face an identity crisis?" These were some questions that kept bothering Sairee Chahal, an entrepreneur who has been conscious about the theme of women in the workforce.

She doesn't just talk about the problems but also takes charge. In 2014, she came up with the idea for Sheroes - a platform that helps women with mentorship, career resources, skills development, jobs and work from home options. With her start-up, she aims to put a million women in the workforce in the next coming years.

Kazimi: You are based in India. What is the status of women employment in the nation?

Sairee: India has some startling numbers, which are hard to ignore. We have only 17 per cent women in the formal GDPed workforce, only 5 per cent women in leadership and our gender ranking globally is at 113 out of 136 countries. 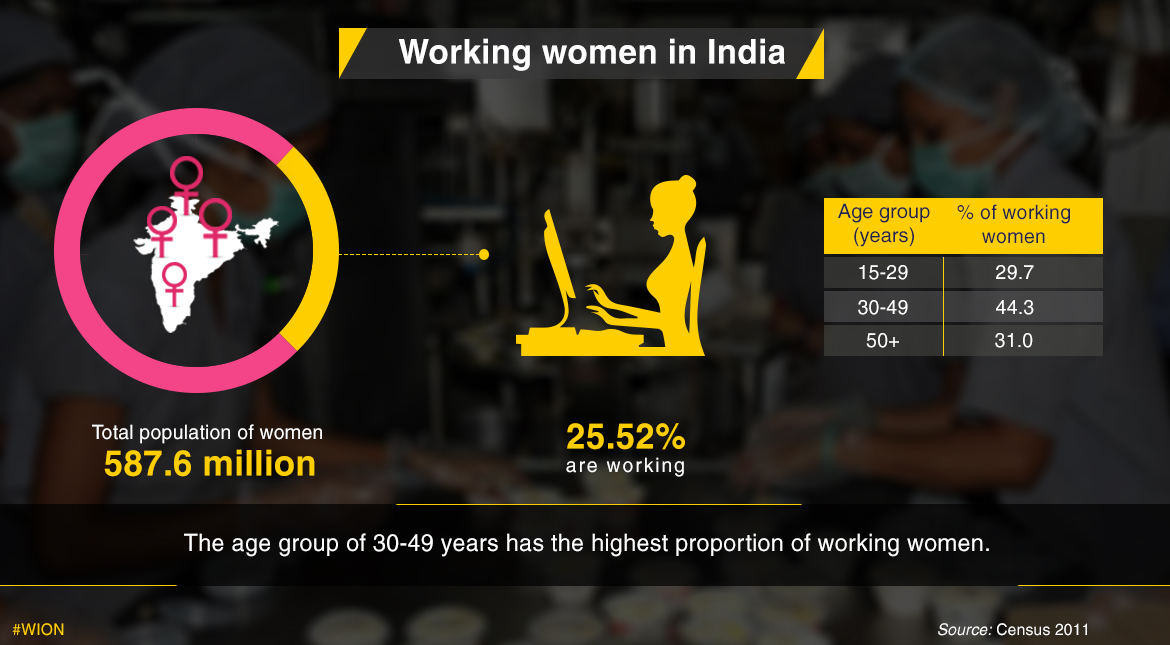 Out of the total women population, the age group of 30-49 years constitutes the highest proportion of working women. (WION)

Kazimi: Do you feel this is because of the lack of educational opportunities for women in India?

Sairee: India has the maximum number of women graduates in the world, so there are more women who study and far less who work in the formal workforce.

Kazimi: So where do you feel the problem lies?

Sairee: Almost 48 per cent women drop out of work before reaching mid levels and most do not come back. The problems are of all kinds ranging from

We are a complex nation; women own and run the caregiving economy – babies, eldercare, weddings, big festivals, family - the list goes on and on. In that process, a woman’s career becomes nobody’s business, sometimes not even hers.

Kazimi: So how does your initiative make a difference?

Sairee: The idea is simple. We partner every woman to stay on a career path of her choice and excel at it – be it that of a first-time intern, work-at-home mom or a top corporate strategist or an entrepreneur. We are attempting to help urban women find choices that work for them, do well in the career they choose, turn entrepreneurial or make effective career comebacks. The core of our philosophy is to help women navigate career stages and find work that fits their life. 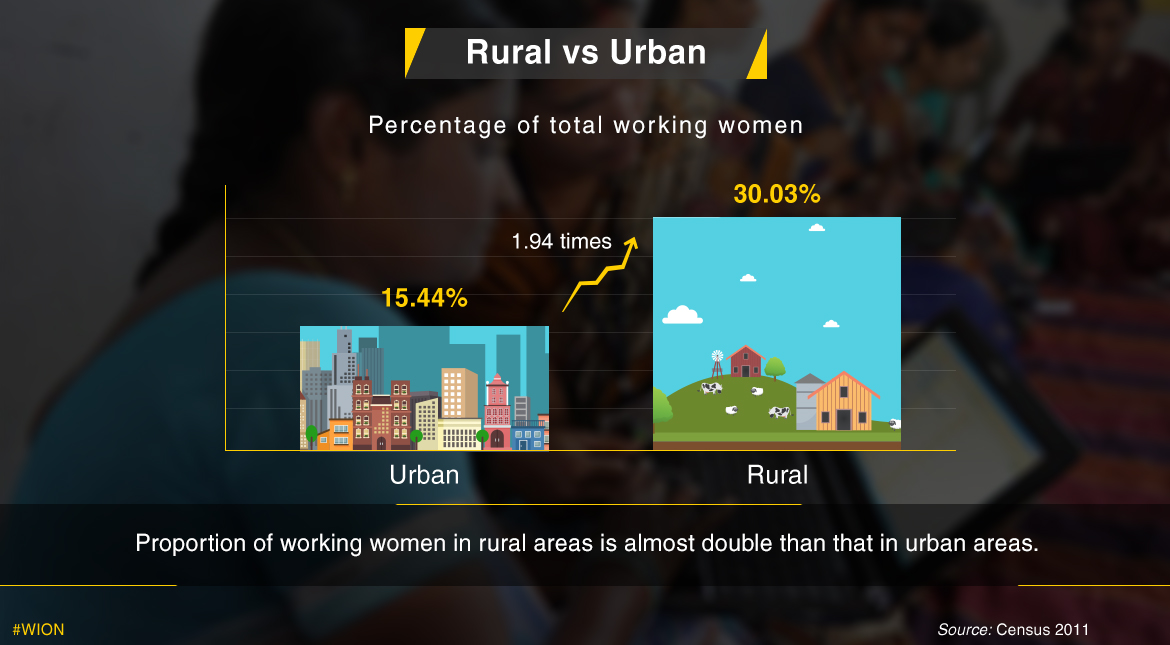 Proportion of women working in rural areas is almost double that of urban areas. (WION)

Kazimi: What should be done to bridge the gender pay gap?

Sairee: To reduce the gender pay gap, what could be done is - being more transparent about the pay-out for a specific role, companies should start looking at them as talent resource and not female employees and women must stop being shy to ask for what they think they deserve.

Kazimi: What was the initial response to your ideas?

Sairee: Initially, it was tough convincing everyone that women’s careers matter and that small changes can make big impact when it comes to gender diversity, remote work, entrepreneurship and women in leadership.

Being able to create business alignment with what will be financial value plus social impact has been a challenge. When you are at an early stage of a category, you are written off easily. Or being a bootstrapped start-up with a big audacious goal is not easily acceptable.

Kazimi: What keeps you going in the lows?

Sairee: I have an amazing team, a vibrant community and a goal worth chasing – giving every Indian woman a dream of the career of her choice. Very able mentors and partners also support the venture. One can either make way for fear and regret or one can be open and stay charged. We take charge.

Kazimi:  How do you think the role of women in society has evolved over the years?

Sairee: The role of women is changing from being nurturers and caregivers to disruptors, creators and growth hackers. While women have come a long way, they still have a long way to go. Corporates are adapting to newer forms of work engagements, being more inclusive and building up a supportive ecosystem. It will take time, but we are moving in the right direction.

The role of women is changing from being nurturers and caregivers to disruptors, creators and growth hackers

Kazimi: What impact have you been able to make with Sheroes?

Sairee: Once a priest’s wife from a small village in the state of Bihar called asking for career help. She had studied before getting married and never worked. Now she was an empty nester, with kids settled overseas. She wanted to find herself an identity, a career and we managed to help her with an opportunity. Millions of women across the country have similar stories and they share them with us. That is why we are a community, where one comes in when you might be just curious or inclined.

Proportion of women working in rural areas is almost double that of urban areas. (WION)

Kazimi: What advice would you like to give to women struggling with their careers?

Sairee: Ask for help. Reach out. Talk. There is always somebody who will be able to show you the way.