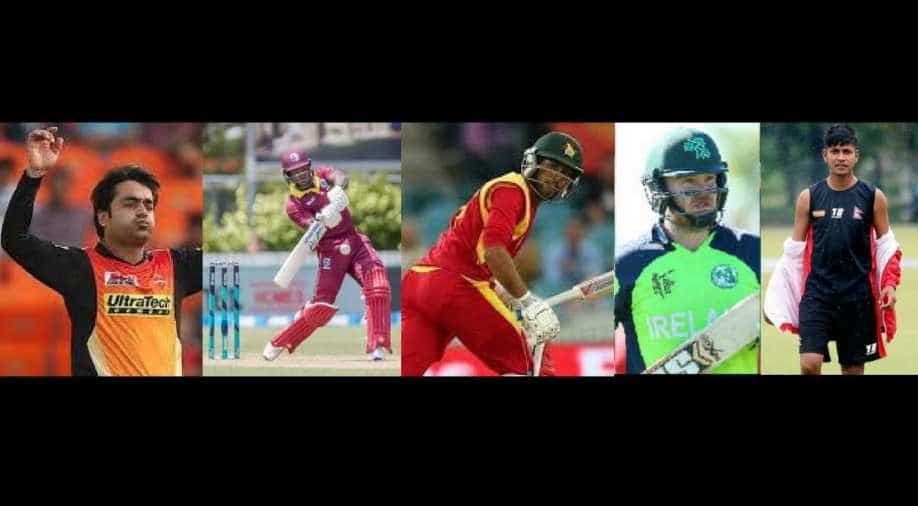 The ICC World Cup Qualifiers has begun in Zimbabwe from the 4th of March. 10 teams will be fighting it out in this tournament to get the opportunity to feature in the ICC Cricket World Cup 2019 which will have 10 teams this time around instead of the usual 14. The top eight teams have already qualified for the World Cup and two teams from the Qualifiers will now join them.

With teams like West Indies, Zimbabwe, Afghanistan and Ireland battling it out, there is a lot of interest this time in the World Cup Qualifiers. There will be an abundance of talent on display and it will be exciting to see some of them in action during the course of the tournament.

Let’s have a look at some of the stars who can make an impact in the ICC World Cup Qualifiers this time.

Rashid Khan (Afghanistan)
This man needs no introduction. Afghanistan’s star leg-spinner has single-handedly taken his country storming ahead in the last one year and is progressing superbly well with each game. The 19-year-old will be leading his team in the ICC World Cup Qualifiers and Afghanistan would be banking on this charismatic champion to bail them through. Rashid had recently leaped up the top of the MRF Tyres ICC Men's ODI Bowling Rankings after securing 86 wickets in 37 matches at an outstandingly low average of 13.26. His sharp turn and accuracy are sure to trouble several batsmen in the tournament.

Rovman Powell (West Indies)
While his numbers might not be breathtaking, Rovman Powell of the West Indies does have some great talent. The 24-year-old all-rounder has a lot to offer and in the absence of their star player, Andre Russell, the onus will be on Powell to make this opportunity count. Powell has a strong bottom hand and a good hand-eye coordination and his explosive batting in the Caribbean Premier League (CPL) have won him a lot of fans. He is also a decent medium pacer and can bowl some valuable overs in the middle. The World Cup Qualifiers are a tricky proposition for the West Indies but Rovman Powell’s all-rounding skills can come in real handy for them.

Sikandar Raza (Zimbabwe)
Zimbabwe cricket has had to go through a lot of topsy-turvy times recently. But even in all their gloom, they found a bright ray of sunshine in the batting of Sikandar Raza. The exceptionally gifted batsman has played many a vital knock for his country in recent times and Zimbabwe will continue to look up to Raza to help them in this tournament. Raza's match-winning 92 from 74 balls against Afghanistan recently showed that he is in good form and the 24-year-old would be keen to exhibit his best in this vital tournament. One thing that might also favour Raza is that he would be playing at home, where he has struck 2 centuries and 6 half-centuries.

Paul Stirling (Ireland)
He has been one of Ireland cricket’s stalwarts over the years and will continue to remain their primary force in the World Cup Qualifiers. In fact, for Ireland to make it to the finals of the event, Paul Stirling, who has 3000-plus ODI runs in his kitty along with 6 centuries, would have to take the lead role. Stirling is an aggressive batsman and enjoys smiting the ball down the ground and loves to play the pull and the hook shots. He can produce a range of strokes and when inflow can be hard to stop. Stirling has been in good form of late and will be hoping to carry that form over in the tournament for the benefit of his team.

Sandeep Lamichhane (Nepal)
Even though he has not played an international game yet, Nepal’s Sandeep Lamichhanehas become quite a sensation in his country. In the recent Indian Premier League (IPL) auctions in January, Lamichhanehas became the first cricketer from Nepal to bag a contract from the league. The 17-year-old leg-spinner is tremendously talented and had first made news after taking a hat-trick in the 2016 U-19 World Cup. Lamichhanehas gets a good turn and has great control and accuracy to trouble batsmen. He has been in good form and was instrumental in Nepal’s entry to the Qualifiers after taking a sensational 5-20 against Kenya earlier this month. The surfaces in Zimbabwe should aid him and it would be interesting to see how this gifted youngster operates in the tournament.

The stakes are quite high this time in the ICC World Cup Qualifiers. The next few weeks are bound to be full of high-octane action and a lot of thrill. It will be quite exciting to see these players in action and to see what kind of impact they eventually leave by the end of the tournament. Interesting days, thus, lie ahead for cricket fans.