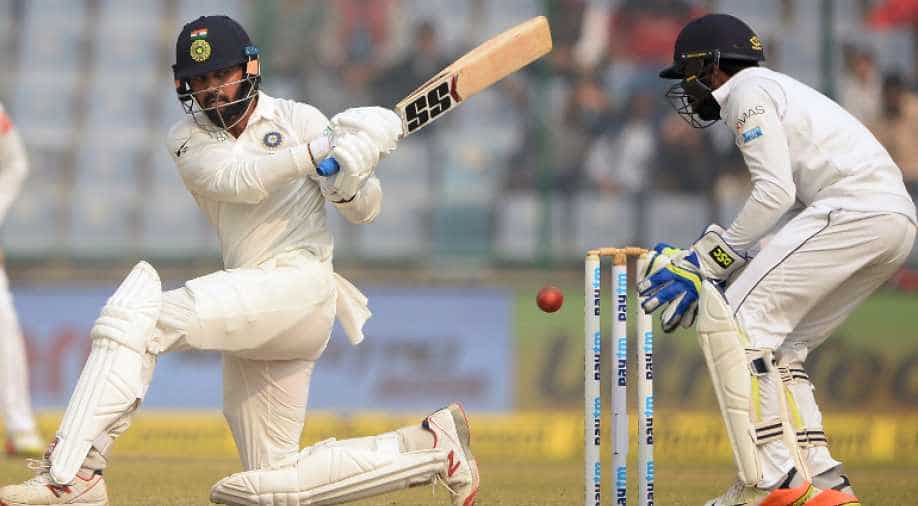 Opener Murali Vijay stroked a fluent fifty to steer a record-chasing India to 116 for two at lunch on the opening day of the third and final test against Sri Lanka on Saturday.

The tourists struck twice in the morning but could not stem the flow of boundaries, which made up 72 of India's runs at the interval.

Vijay, who scored 128 in the second test in Nagpur, was 51 not out, with skipper Virat Kohli looking characteristically fluent at the other end on 17 after he had won the toss and opted to bat at the Feroz Shah Kotla.

Right-handed opener Lokesh Rahul made way for the left-handed Shikhar Dhawan as India, 1-0 up in the series, shuffled the top of their batting order for a third match in a row.

Dhawan could not make the most of the opportunity, though, his attempted sweep shot off Dilruwan Perera resulting in a top edge which Suranga Lakmal pouched at deep square leg.

The opener made 23 before becoming the off-spinner's 100th test victim in a Sri Lankan record 25 tests, two less than spin great Muttiah Muralitharan.

Next man in Cheteshwar Pujara played with trademark sagacity and hit four boundaries before walking into a Sri Lankan trap.

Paceman Lahiru Gamage stationed Sadeera Samarawickrama at leg slip and bowled the perfect delivery which Pujara tickled to the fielder to depart after making 23.

On a track that appears pregnant with runs, Vijay drove and cut with impunity, hitting seven boundaries in his elegant knock.

The right-hander brought up his fifty courtesy an overthrow by the Sri Lankans in the final over before lunch.

The hosts, chasing a record-equalling ninth consecutive test series victory, also made a bowling change with paceman Mohammed Shami returning to the side at the expense of Umesh Yadav.