India vs England: Skipper Cook upbeat ahead of 2nd Test 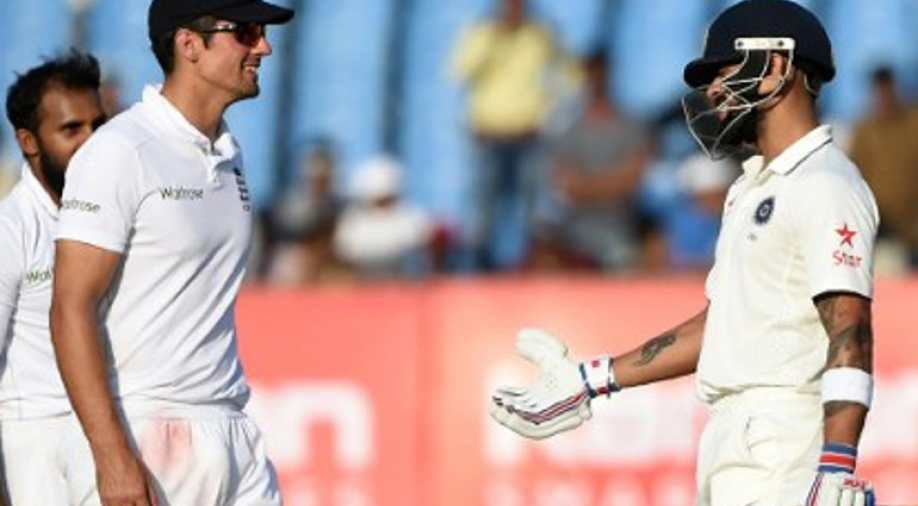 England skipper Alastair Cook said Wednesday his spinners were running high on confidence and could turn the tables on top-ranked India if a turning track was offered in the second Test in Visakhapatnam.

England's raw spin trio of Moeen Ali, Adil Rashid and Zafar Ansari shared 13 wickets between them to force the mighty Indians on the backfoot in the drawn first Test in Rajkot.

Leg-spinner Rashid led the charge with seven wickets as the hosts held on to a tense draw after losing six quick wickets on the final afternoon.

On the same track, India's famed spin attack struggled, with the world number one bowler Ravichandran Ashwin returning a dismal 3-230 -- his worst bowling figures at home since December 2012.

Cook credited the success of his tweakers to former Pakistan off-spinner Saqlain Mushtaq, whose contract as England's spin consultant has been extended until the third Test of the ongoing five-match series.

"I thought they bowled excellently as a group of three spinners," Cook told reporters ahead of the second Test beginning on Thursday.

"Credit to Saqi (Saqlain) coming in and giving those guys confidence to go out and play. They are inexperienced in these conditions but they took a big step forward and it's great to see that.

"If they continue at that level, like in Rajkot, then there is no reason why we can't put pressure on Indian batting with our spinners."

Cook led from the front with a brilliant 130 in the second innings, one of four centuries by the visiting batsmen, to counter the Indian bowlers in their own den.

"We got a good total and we managed to push the game forward to the fifth day.

"Unfortunately we didn't quite get over the line but we begin afresh 0-0 at the start of the second Test. And we are here to give India a run for their money," said Cook.

England though face a late selection quandary over pace spearhead Chris Woakes, who is down with a minor knee injury.

Fast bowler Jimmy Anderson would be itching to take the field against India after missing the first Test but Cook admitted he faced tough competition.

India's spin force of Ashwin, Ravindra Jadeja and Amit Mishra failed to get the desired success on a fast Rajkot track, sharing nine wickets in the two innings.

Indian captain Virat Kohli who had criticised the presence of grass on the Rajkot wicket, is expecting turn in Visakhapatnam, which is set to host its first Test ever.

"It's a wicket where spinners will find it really nice to bowl on and expect the same going into the game," said Kohli.

"We want to focus on our strengths and play the cricket that we have as a team at home and put the pressure on the opposition."

Kohli also confirmed fit-again opener Lokesh Rahul was a certainty in the starting XI, dousing any chance of veteran Gautam Gambhir playing a part in the series.

The left-handed Gambhir, making a comeback to the national side after a gap of two years, scored 29 and a duck.