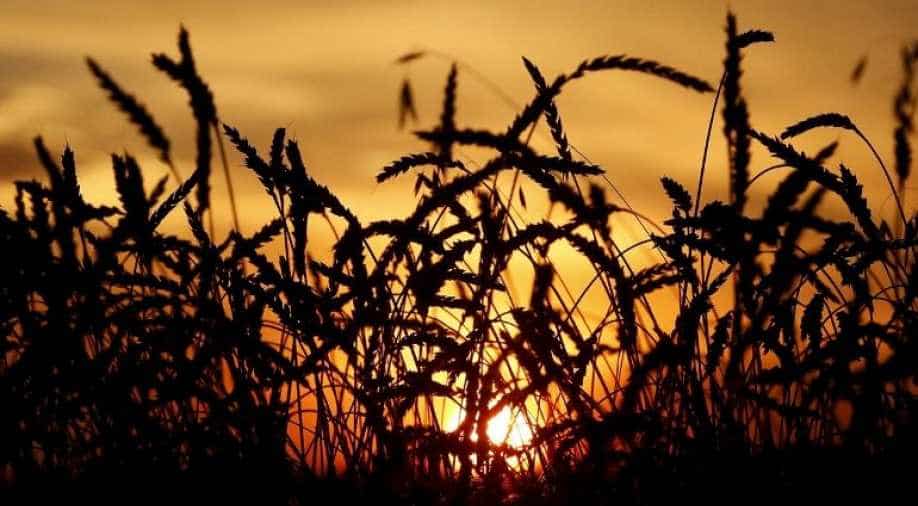 File photo: Wheat is seen during sunset in a field of the Solgonskoye farming company in the village of Solgon, Russia.  Photograph:( Reuters )

FAO also predicted that cereal production would be 2.704 billion tonnes in 2019, slightly lower than its last forecast.

World food prices rose for the first time in five months in October, boosted by jumps in quotations for sugar and cereals, the United Nations food agency said on Thursday.

The Food and Agriculture Organization (FAO) food price index, which measures monthly changes for a basket of cereals, oilseeds, dairy products, meat and sugar, averaged 172.7 points in October, up 1.7 per cent on the previous month and 6.0 per cent year-on-year.

FAO also predicted that cereal production would be 2.704 billion tonnes in 2019, slightly lower than its last forecast.

The FAO sugar price index jumped 5.8 per cent from September levels, largely because of expectations of lower supplies in the year ahead following forecasts of large reductions in sugar output in India and Thailand.

The cereal price index rose 4.2 per cent, with wheat and maize export prices climbing on the back of reduced crop prospects in several major producing countries and "robust trade activity". By contrast, rice prices fell, hit by subdued demand and expectations of an abundant basmati harvest.

The vegetable oil price index increased 0.5 per cent to reach its highest level in more than a year, while the meat price index rose 0.9 per cent, driven by higher import demand, especially from China.

By contrast, the dairy price index dropped 0.7per cent in October, as lower quotations for cheese offset increases in those for skimmed and whole milk powders, FAO said.

The U.N. agency said worldwide coarse grain production in 2019 was seen at 1.425 billion tonnes, down 1.3 million on the previous forecast.

Wheat output was seen at 765 million tonnes, down nearly 1 million tonnes on the last outlook, but still on course to set a new record and up 4.5 per cent on 2018 levels.

The forecast for global rice production was put at 513.4 million tonnes, little changed on the previous forecast and slightly below 2018 levels.