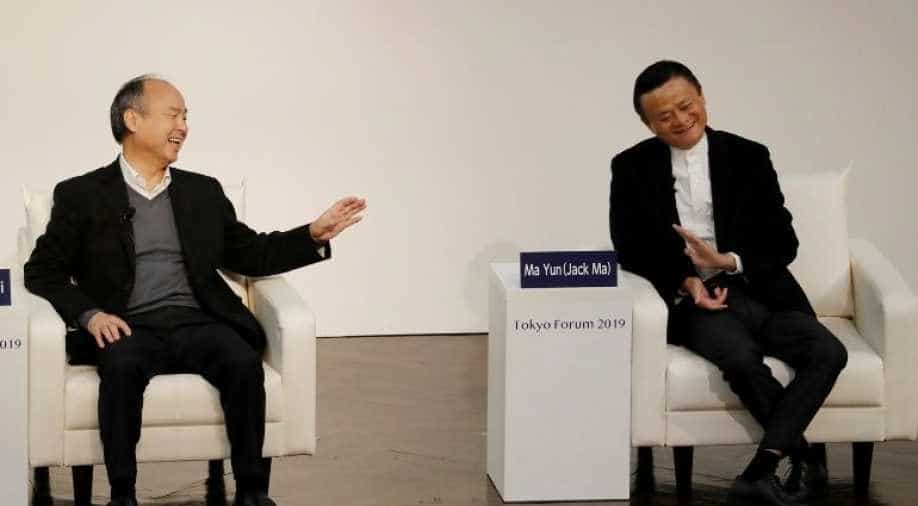 SoftBank owns 26 per cent of China's Alibaba, with its origin in a $20 million investment in 2000, and the stake is now worth more than the Japanese firm's market capitalization

SoftBank owns 26 per cent of China's Alibaba, with its origin in a $20 million investment in 2000, and the stake is now worth more than the Japanese firm's market capitalization.

Son on Friday said the decision to invest in Alibaba was driven by a gut feeling.

Other entrepreneurs Son met at that time "did not have true belief in their heart. I can feel," Son said. "We are the same animal. We are both a little crazy," he said of long-time ally Ma.

Ma said Son initially tried to invest $50 million in the e-commerce firm, but that he declined saying it was too large a sum - part of a pattern of offering big cheques to company founders that continued with WeWork co-founder Adam Neumann.

Son's comments come weeks after he was forced to bail out office-sharing startup WeWork when Neumann's level of control over his firm and hard-partying ways chilled investor appetite and crashed plans for an initial public offering (IPO).

The conversation at Tokyo University between two of Asia's most prominent tech entrepreneurs comes at a point of divergence in their careers, with 55-year-old Ma retiring as Alibaba's executive chairman in September and Son pledging to spend his sixth decade at the helm of his investment juggernaut.

Domestically, SoftBank hopes to drive commercialization of the emerging field of artificial intelligence (AI), announcing on Friday it will spend 20 billion yen ($184 million) over 10 years funding an AI research institute with Tokyo University.

Son "probably has the biggest guts in the world on doing investment," Ma told attendees to the conference.

"Too much guts, sometimes I lose a lot of money," Son responded.

With the highly leveraged SoftBank trying to raise funds for a second megafund in which it is currently the only investor, its stake in Alibaba is one possible source of funds.

"In my view, I have not achieved anything yet," Son said. "I'm still a challenger and every day I'm still fighting."

That approach contrasts with Ma, who stepped back from running Alibaba to focus on philanthropy.