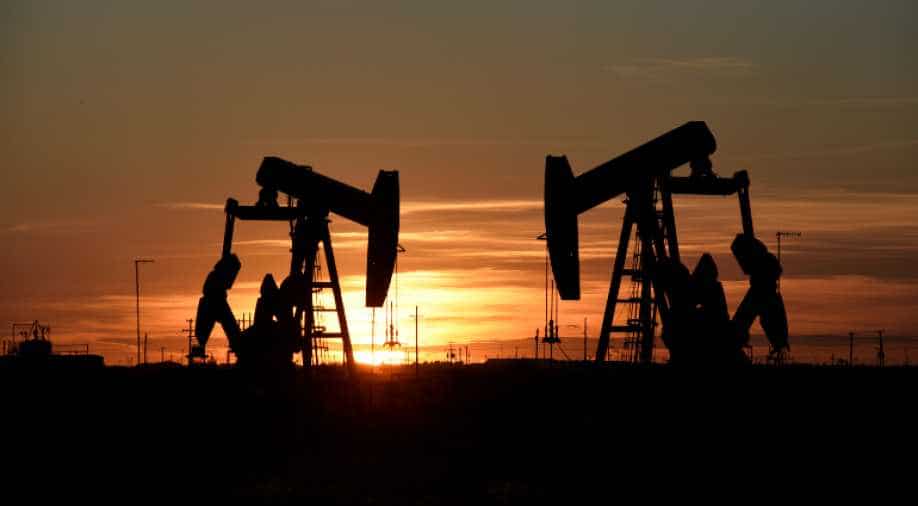 Pump jacks operate at sunset in an oilfield in Midland, Texas US. Photograph:( Reuters )

Saudi Arabia and the UAE are the largest and third-largest producers, respectively, in the Organisation of the Petroleum Exporting Countries (OPEC).

Oil futures rose on Monday on increasing concerns about supply disruptions in the crucial producing region of the Middle East even as investors and traders fretted over global economic growth prospects amid a standoff in the Sino-US trade talks.

The US West Texas Intermediate (WTI) futures were at $61.73 per barrel, up 7 cents, or 0.1%, from their previous settlement.

Saudi Arabia said on Monday that two Saudi oil tankers were among vessels targeted by a "sabotage attack" off the coast of the United Arab Emirates, condemning it as an attempt to undermine the security of global crude supplies.

Saudi Arabia and the UAE are the largest and third-largest producers, respectively, in the Organisation of the Petroleum Exporting Countries (OPEC), according to the latest survey by Reuters.

"Rising geopolitical tensions in the Middle East, together with sharply declining oil supplies from Venezuela and Iran, will remain bullish for prices," said Abhishek Kumar, head of analytics at Interfax Energy in London.

Markets have been supported by Washington's bid to cut Iran's oil exports to zero and reduce exports from Venezuela, where infrastructure problems have also cut output.

The United States reimposed sanctions on Iran in November after pulling out of a 2015 nuclear accord between Tehran and world powers last year.

Investors are also focused on tightened supplies following OPEC-led production cuts since the start of the year. There is a consensus that OPEC and its producer allies will extend the six-month output-cut agreement when they meet in June.

But the trade friction between Washington and China, which intensified last week will keep a lid on prices, said Kumar.

The United States and China together accounted for 34% of global oil consumption in the first quarter of 2019, data from the International Energy Agency showed.

"The US-China trade war is set to intensify, which will limit gains in prices," Kumar said.

"Market participants will closely watch China's retaliatory steps in response to the imposition of additional US tariffs on Chinese goods," Kumar said, adding the dispute "could be particularly detrimental to the growth in global oil demand".

The trade turmoil has prompted hedge funds to cut their bullish wagers on US crude oil to the lowest level in a month and raised their bets on Brent crude to the highest in nearly seven months, US government data showed on Friday.

Separately, in an early indicator of future output, US energy companies last week reduced the number of oil rigs operating for the third time in four weeks, cutting them by two and bringing the count down 805.