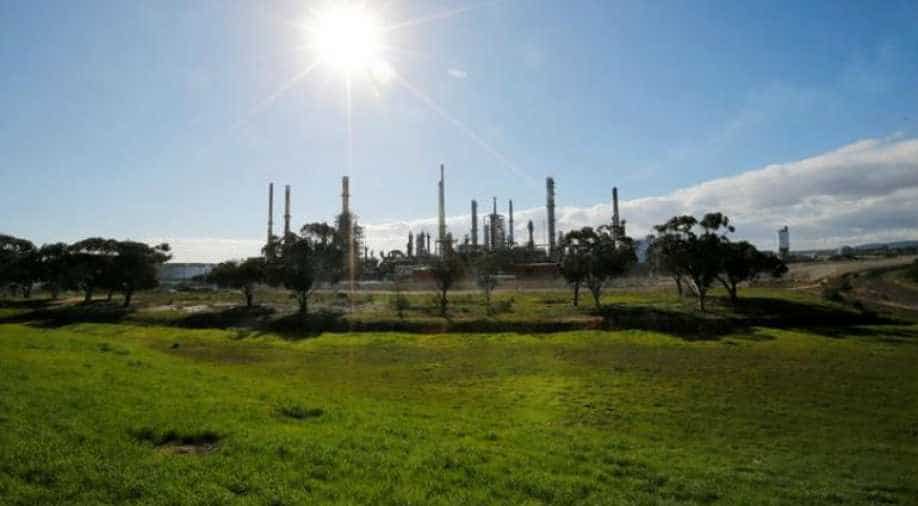 The Chevron Oil Refinery is seen in this picture illustration Photograph:( Reuters )

Oil prices fell further after tumbling in the previous session when OPEC and allied producers extended output cuts. ||On Thursday, OPEC and some non-OPEC producers had agreed to extend a pledge to cut around 1.8 million barrels per day (bpd) until the end of the first quarter of 2018. ||

Oil extended falls on Friday after tumbling in the previous session when OPEC and allied producers extended output cuts but disappointed investors betting on longer or larger supply curbs.

At Thursday's meeting in Vienna, the Organization of the Petroleum Exporting Countries (OPEC) and some non-OPEC producers agreed to extend a pledge to cut around 1.8 million barrels per day (bpd) until the end of the first quarter of 2018. The initial agreement would have expired in June this year.

Crude oil plunged 5 per cent following the announcement, and held its losses early on Friday.

"With Russia and Saudi announcing nine months (of extended cuts) a week before, this was already priced in, so the market wanted the "over-and-above" which didn't come – hence the sell-off," said Virendra Chauhan, oil analyst at Energy Aspects in Singapore, referring to a statement by Saudi Arabia and Russia earlier in May that a none months extension to the cut was needed.

Britain's Barclays bank said the ongoing production cut would result in a drawdown of bloated fuel inventories, but added that OPEC's goal of bringing stocks down to their five-year average would not be reached within the timeframe of the production cut.

Other analysts, including at Goldman Sachs and Jefferies bank said a normalisation of oil inventories could occur in early 2018.

Analysts also said that the OPEC-led production cuts would support a further rise in US output.

Ann-Louise Hittle, vice president at energy consultancy Wood Mackenzie said that the "decision in Vienna sends a signal of continued support for oil prices from OPEC which helps US onshore drillers make plans" to further increase their production.

US oil production has already risen by 10 per cent since mid-2016 to over 9.3 million bpd, close to the output of top producers Russia and Saudi Arabia.

"OPEC agreeing to nine months without deeper cuts leaves prices at the mercy of inventories and US production and demand," said Greg McKenna, chief market strategist at futures brokerage AxiTrader.

Goldman Sachs warned that the biggest risk to oil markets was what would happen next year, at the end of the OPEC-led production cut.

With US output rising steadily and OPEC and its allies potentially ramping up production in 2018 to regain lost market share, many traders are already expect another price slump.