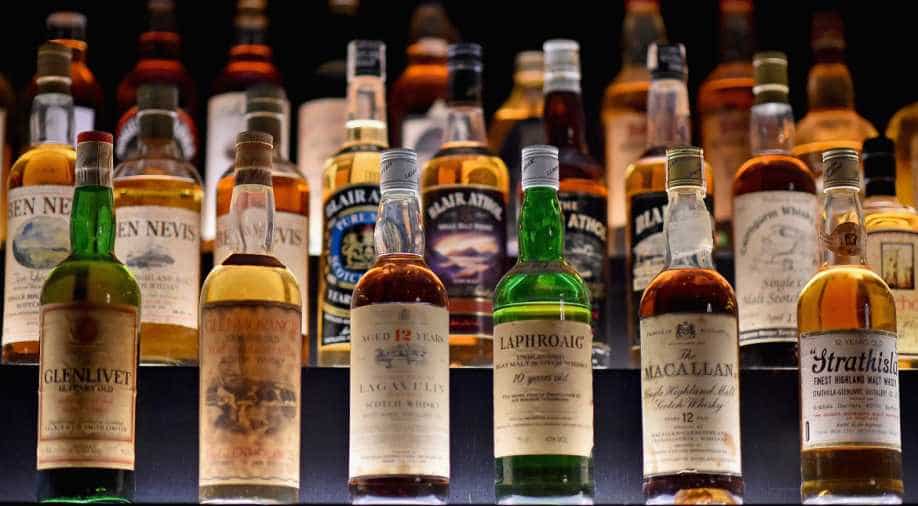 Bottles of whisky on display in the Diageo Claive Vidiz Collection, the world's largest collection of Scottish Whisky, on display at The Scotch Whisky Experience on September 3, 2015 in Edinburgh,Scotland. Photograph:( Getty )

While most of Scotland voted against leaving the European Union, whisky makers have quietly been raising a wee dram to a side-effect of the Brexit vote -- a plunge in the value of the Pound.

The currency devaluation has made exports cheaper, generating a bump since 90 per cent of Scotch whisky is sold outside Britain, although the industry warns the longer-term outlook is far more cloudy.

David Williamson, communications director for the Scotch Whisky Association, said: "Because of the relative strength of the pound we're certainly getting anecdotal reports back from our member companies that has helped to boost exports."

And Tony Reeman-Clark, who runs the Strathearn Distillery in Perthshire -- a relative newcomer to the market -- said: "I have been talking to people from bigger distilleries who said there has been a lot of interest, and a lot of sales, because of the weak pound."

Reeman-Clark, who is also the founder of the Scottish Craft Distillers Association, said Strathearn began producing whisky three years ago and its first 100 bottles were auctioned off on 1 December.

The first sold for 4,150 pounds to an Italian buyer, far exceeding Reeman-Clark's expectations.

He said he had received bids from as far away as "Auckland, Beijing, Hong Kong, Israel, Germany, America, all over the world".

Since the shock June vote the Pound has tumbled about 15 per cent against the greenback and Graham Hutcheon, the operations director of distiller Edrington, said the industry was having a "jamboree time". However, he urged the government to provide clarity on Brexit, Bloomberg news agency reported.

"We don't know the questions to ask, let alone answer," said Hutcheon, whose company makes whiskies such as Macallan and The Famous Grouse.

More than 500 million bottles worth around 1.7 billion pounds are exported from Britain every year. The full impact of Brexit is not expected to be revealed until distillers complete their annual returns in early 2017.