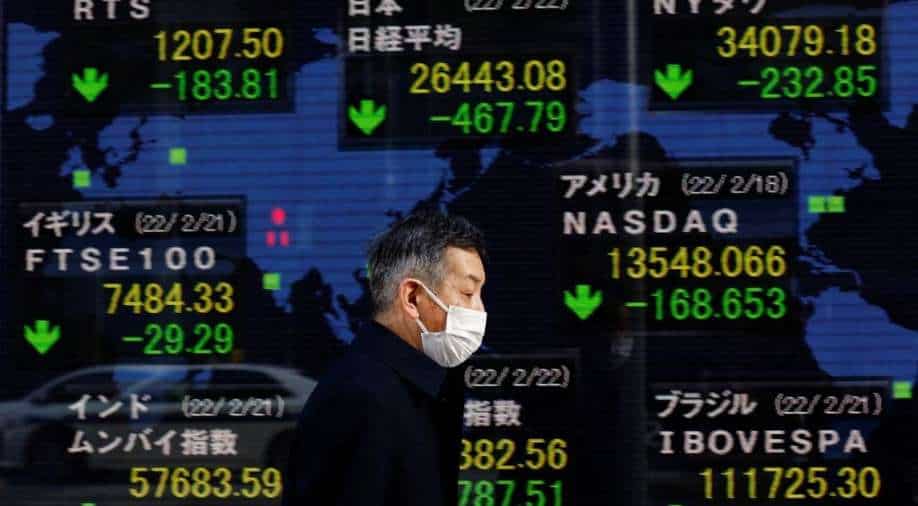 Asset markets have seen a sharp increase in volatility over the deepening crisis, with the Cboe Volatility Index, known as Wall Street's fear gauge, up more than 55% over the past nine days

Global stocks and U.S. bond yields dived on Thursday, while the dollar, gold and oil prices rocketed higher as Russian troops landed in Ukrainian cities on the Black Sea and Ukraine said Moscow had launched a full-scale invasion.

Russian troops landed in the Ukrainian Black Sea port of Odessa and in Mariupol in the eastern Ukrainian region of Donetsk, Russian news agencies reported.

At the same time, Ukrainian military command centres in the cities of Kyiv and Kharkiv came under attack by missile strikes, the Ukrainska Pravda news website cited a Ukrainian interior ministry official as saying.

The attacks came after a blistering warning from Russian President Vladimir Putin on Thursday. Putin called on Ukrainian soldiers to immediately lay down their weapons and go home, and said the responsibility for any bloodshed will be on the conscience "of the Ukrainian regime", according to comments carried by Russian news agencies.

Several explosions were heard in the Ukrainian capital, Kyiv, before dawn, after an initial series of sounds similar to artillery fire, a Reuters witness reported, shortly after Russia announced the military operation.

The comments worsened an already grim selloff in Asian trade, pushing MSCI's broadest index of Asia-Pacific shares outside Japan down more than 3.2%, with Australian shares off more than 3% and Chinese blue chips down 1.3%.

"The market was always trying to judge if they would stop at Donbass, and it looks pretty clear that they are moving toward Kyiv, which was always one of the worst case scenarios, because we now have a long night ahead of us trying to understand how bad this gets, and what sanctions get put up, because there has to be a fresh round of sanctions now against Putin and the Russian government," said Chris Weston, head of research at Pepperstone.

"That's where the worst case, or the bear case scenario is for markets, and that's what we're seeing. There are no buyers here for risk, and there are a lot of sellers out there, so this market is getting hit very hard."

Asset markets have seen a sharp increase in volatility over the deepening crisis, with the Cboe Volatility Index, known as Wall Street's fear gauge, up more than 55% over the past nine days.

Brent crude futures, which seesawed between sharp rises and falls on Wednesday, jumped more than 3.5% to shoot past $100 a barrel on Thursday for the first time since September 2014. West Texas Intermediate leaped 4.6% to $96.22 per barrel, their highest since August 2014.[O/R]

The deepening selloff in equities came after U.S. stocks already took a beating on Wednesday, with the Dow Jones Industrial Average down 1.38% to barely above the level that would have confirmed a correction. The MSCI World Index, a leading gauge of equity markets globally, skidded to its lowest level since April 2021.

Investors have also been grappling with the prospect of imminent policy tightening by the U.S. Federal Reserve aimed at combating surging inflation, which NAB analysts say could be exacerbated by a commodities supply shock.

While expectations of an aggressive 50-basis-point hike at the Fed's March meeting have eased, Fed funds futures continue to point to at least six rate hikes this year. [FEDWATCH]

The global flight to safety boosted the dollar, which jumped more than half a percent a basket of other major trading partners to 96.715.

The Russian rouble turned violently lower after posting small gains early in the session. It was last down nearly 4% on top of a 3% slump against the dollar on Wednesday.

The sell-off spread to cryptocurrency markets, pushing bitcoin below $35,000 for the first time in a month.

"Markets are now more adequately pricing in the risk of something horrific happening. That combined with the uncertainty is a horrible environment to be in. No one wants risk exposure when that's floating around," said Rob Carnell, head of Asia Pacific research at ING.