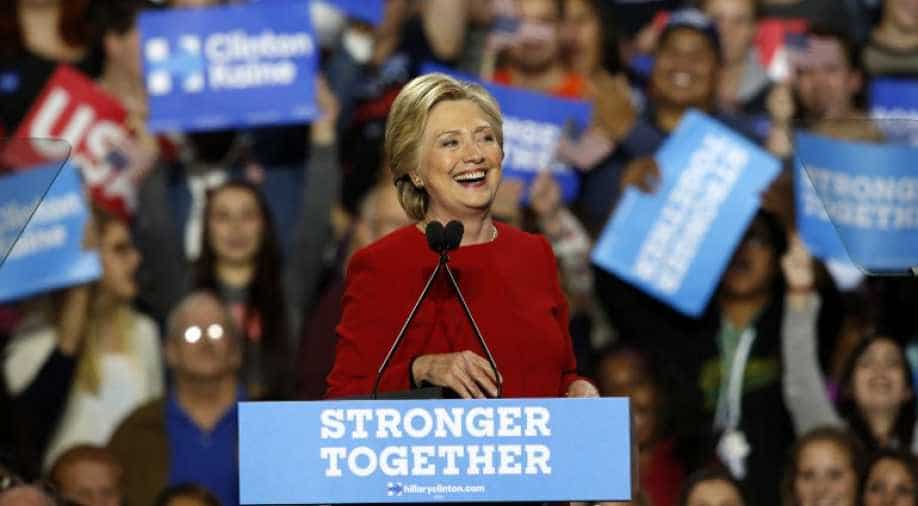 Investors consider Clinton a safer bet as compared to Donald Trump, who they believe will wreck the global economy. Photograph:( AFP )

Global equities markets were cheered Monday, taking heart in the final hours before the US elections after authorities again cleared Hillary Clinton of criminal wrongdoing over her emails.

The markets rallied, ending days of declines, after Sunday's announcement by the Federal Bureau of Investigation that the Democratic candidate still would not face charges over her use of a private server following review of the latest batch of emails.

"Hillary Clinton getting the all-clear from the FBI over a new set of emails saw markets convulse into nervous relief," said Jasper Lawler, an analyst at CMC Markets. "Stocks and North American currencies were in demand and havens like gold and bonds were dumped."

In New York, the major indices soared, with the S&P 500 snapping a nine-day losing streak and rising 2.2 per cent, its biggest gain since March. The Dow Jones Industrial Average rose 2.1 per cent and the Nasdaq finished 2.4 per cent higher.

In Europe, Frankfurt and Paris both posted gains of 1.9 per cent, with London, up 1.7 per cent, not far behind.

"Looks like a relief rally for investors that were worried about the outcome," said Jack Ablin of BMO Private Bank. "Now that uncertainty surrounding the FBI investigation has been lifted investors believe that Hillary Clinton will win tomorrow."

Markets were in turmoil for the past week after the FBI said on October 28 that new emails linked to Clinton were being investigated, less than two weeks before the November 8 vote, this after having cleared Clinton once already in July.

The FBI had probed Clinton's use of a private email server while serving as secretary of state for possible violations in the handling of classified information.

The Vix volatility index, a benchmark for investor fear, declined after nine straight days of gains.

But JJ Kinahan, chief market strategist at TD Ameritrade, suggested some investors had oversold, since uncertainty about the election result remains, despite stock gains.

"It's hard to believe that without any results (except for early voting) the world's suddenly a happy place and there's no risk any more," Kinahan said.

Clinton is considered by many investors to be a safer bet than Trump, who is seen as a loose cannon with policies many fear could wreck the world's top economy.

The dollar rose sharply against the euro, the Yen and the Pound, as exchange markets shared in what investors viewed as positive news about the United States.

The Mexican Peso -- which has taken on an inverse relationship with Trump's presidential prospects -- also staged a stunning rally against the dollar to recoup all its losses from last week.

The currency is considered a reflection of Trump's chances because of his anti-Mexican rhetoric -- including his pledge to remove undocumented immigrants, build a border wall and tear up a trade deal.