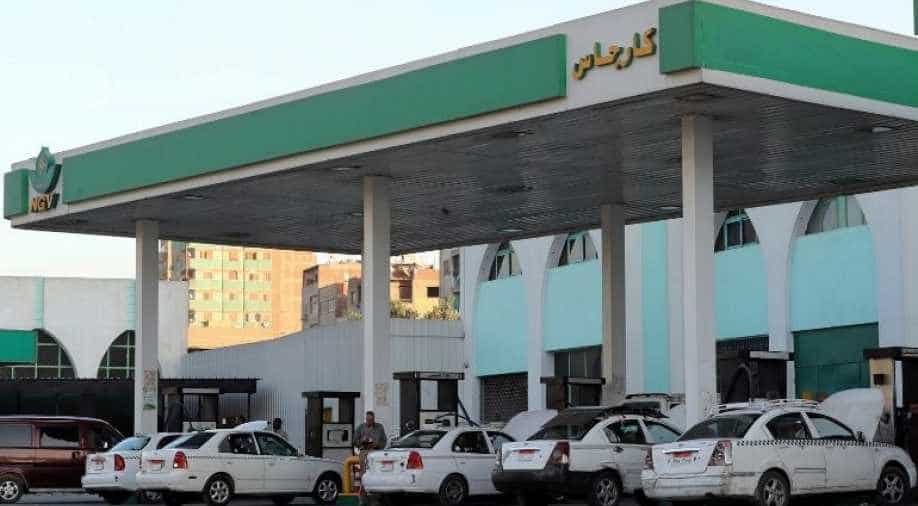 Taxis and cars are filled up with gas at Natural Gas Vehicles (NGV) petrol station in Cairo, Egypt. Photograph:( Reuters )

About 300,000 vehicles, mostly taxis and minibuses, have been converted to duel-fuel systems since the 1990s, a small fraction of the 11 million vehicles licensed in the country.

The number of Egyptians switching to duel-fuel vehicles is accelerating as the government pushes motorists to use cheaper, cleaner and plentiful natural gas.

About 300,000 vehicles, mostly taxis and minibuses, have been converted to duel-fuel systems since the 1990s, a small fraction of the 11 million vehicles licensed in the country.

Nearly 32,000 vehicles were converted during the financial year from July 2018 to June 2019, two petroleum ministry officials said. The target for this financial year is 50,000 vehicles. That compares with just 6,000 conversions in 2015/16.

Officials say the number of private cars converting is rising. They hope this will soften the blow of petrol price hikes after recent subsidy removals, as well as reducing pollution and cutting the import bill for liquid fuels.

Egyptians have seen steep increases to fuel prices since 2014, with most energy prices brought up to international levels under a three-year, IMF-backed reform plan completed this year.

But gas has remained cheap compared with liquid fuels.

One cubic metre of CNG costs 3.5 Egyptian pounds, roughly the equivalent of one litre of diesel at 6.75 pounds or one litre of 80-octane petrol at 6.5 pounds.

"The ministry of petroleum has maintained an appropriate price so that natural gas always stays at 50 per cent of the 80-octane petrol (price), which encouraged drivers to turn to conversion," said Abdelfattah Moustafa Farahat, head of Egyptian International Gas Technology GASTEC.

Officials say a boom in natural gas production and exploration since the discovery of the giant offshore Zohr gas field in 2015 spurred them to act. Egypt became self-sufficient in natural gas in late 2018.

"The discovery of Zohr field and achieving self-sufficiency in natural gas have encouraged the state to think: why don't we use this gas as a domestic fuel and work to expand its use," said ‭‭‭‭Ayman Shalaby, assistant vice chairman at the Egyptian Natural Gas Holding Company (EGAS).

GASTEC is one of two state-run companies, along with the Natural Gas Vehicles Company (Car Gas), that dominate the sector. Private and foreign companies have also entered the market in the past few years.

GASTEC plans to set up 54 new duel-fuel stations with CNG over the next three years, in partnership with Italy's Eni, as well as building more fuelling stations for public buses, Farahat said. Currently, Egypt has 187 CNG fuelling stations and 72 conversion centres.

The government also has a plan for minibuses, a common form of cheap transport across Egypt. Under the scheme, 142,000 minibuses would be converted and another 88,000 old diesel minibuses replaced with biofuel equivalents over the next three years, while more than 350 fuelling stations would be built.

Officials say conversions are preceded by technical checks and the cylinder size and shape can be adapted to the vehicle.

The government is subsidising and providing low-interest instalment plans for conversion systems, which cost 5,000-7,500 pounds, as well as encouraging assembly plants and importers to provide vehicles with built-in systems.