US investigators working with Saudis, Turkey on Khashoggi's disappearance: Trump 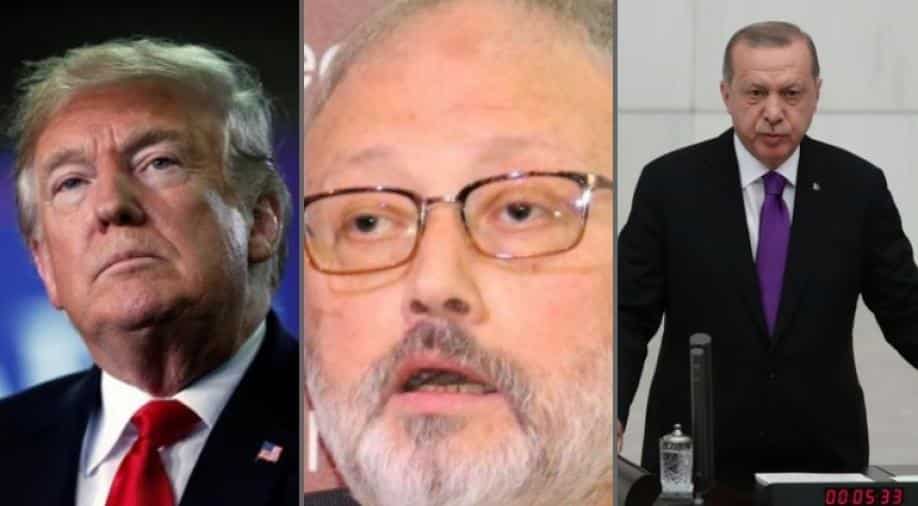 Saudi Arabia has denied any hand in Khashoggi's disappearance asserting that he walked out of the consulate from the back door.

As the mystery deepens over the plight of missing Saudi journalist Jamal Khashoggi who disappeared after entering the Saudi consulate in Istanbul, US President Trump said US investigators are working with Saudis and Turkey to find his whereabouts.

On Wednesday, the US president had told reporters that he had spoken to Saudi authorities at the highest level on Khashoggi's disappearance but did not state Saudi Arabia's response during the conversation.

Senior journalist Khashoggi, 59, who is a strong critic of the Saudi establishment had taken US citizenship after leaving his country and had written several articles against Saudi Arabia's repressive policies for the Washington Post.

The New York Times revealed on Wednesday that a group of 15 men flew down to Turkey in a private jet in order to kill Khashoggi inside the Saudi consulate in Turkey. The Turkish government openly accused Saudi Arabia of colluding to kill the journalist.

Khashoggi had entered the Saudi consulate to submit documents seeking a divorce from his wife living in Saudi Arabia so that he could remarry again in Turkey.

Initially, the Turkey president Erdogan had said the journalist was being held inside the consulate as Saudi Arabia gave Turkish authorities permission to enter the premises and search for him, however, the authorities soon began to reveal through sources that he had, in fact, being killed, as reported by the New York Times article.

Khashoggi's own website on 3rd October had posted a message saying he was arrested at the Saudi consulate in Istanbul but state-run Saudi Press Agency said he had left the building and the consulate was carrying out follow-up procedures and coordinating with the Turkish authorities to "uncover the circumstances" of his disappearance.

Earlier, US secretary of state  Mike Pompeo had expressed support towards a "thorough investigation" on Khashoggi's sudden disappearance.

Meanwhile, Britain's foreign secretary Jeremy Hunt said it was a "very, very serious matter" adding that "if these allegations are true, there will be serious consequences."