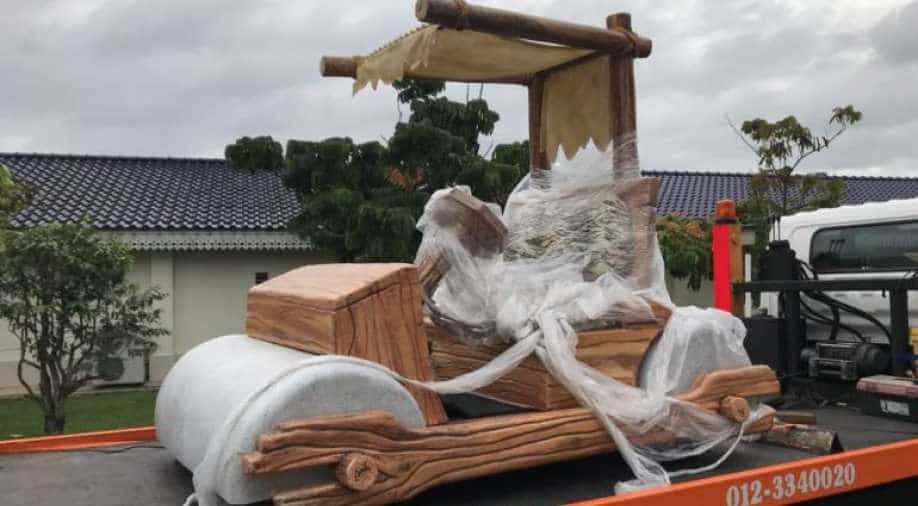 A Malaysian sultan has been given a life-size replica of Fred Flintstone's car from the classic cartoon, although the modern update has an engine so he won't tire out his regal feet.

Sultan Ibrahim Sultan Iskandar of Johor, one of Malaysia's most powerful and wealthiest state rulers, received the belated birthday gift from a fellow high-ranking royal this week.

It will take pride of place in a house he built in the southern coastal town of Mersing inspired by the Flintstone's home from the 1960s cartoon.

"Yabba, dabba, doo," said a post on the sultan's Facebook page Monday, using Fred's favourite catchphrase to announce the arrival of the gift from the crown prince of Pahang state.

In the Hanna-Barbera animated series, which follows the lives of Fred and Wilma Flintstone and their neighbours the Rubbles in the Stone Age, the wooden and stone cars were powered by drivers running along the ground.

But the Facebook post said that "unlike the original, this working version of Fred Flintstone's car has its own motor, meaning the driver and passenger won't have to rely on their feet to power the prehistoric ride".

Pictures showed the car on the back of a flatbed truck as it was handed over to the sultan.

Manjit Abdullah, a representative of the Pahang crown prince who delivered the vehicle, told AFP it was a late gift for his birthday, which falls in November.

It adds to the sultan's eclectic collection of vehicles, which includes Royals Royces and vintage three-wheelers.

Last year the sultan and his family used the three-wheelers to tour Johor state and meet his subjects.

Johor and eight other states in Malaysia are still headed by Islamic royalty. The Muslim-majority country has a unique arrangement in which the national throne changes hands every five years between the rulers.