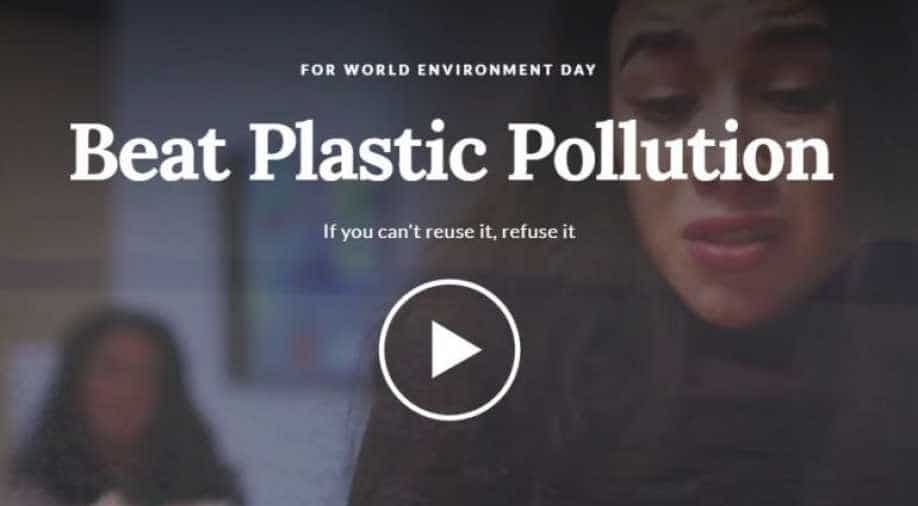 World Environment Day is celebrated every year on June 5. Photograph:( Others )

This year's Environment Day campaigns and programmes are to run on the theme of 'Beat Plastic Pollution'.

World Environment Day is celebrated every year on June 5 with an aim to raise awareness about sustainability and environment protection. It was first initiated in the year 1973 by the United Nations General Assembly and United Nations Environment Programme (UNEP) to check global environmental issues like global warming, deforestation and food security among others.

Over the years, the day has metamorphosed into what can aptly be described as a global campaign on emerging environmental issues ranging from marine pollution, human overpopulation to sustainable consumption and wildlife conservation.

This year's Environment Day campaigns and programmes are to run on the theme of 'Beat Plastic Pollution'.

As per a report published by an environmental watchdog, WorldWatch, in the year 2015, "Some 299 million tons of plastics were produced in 2013, representing a 4 percent increase over 2012. Recovery and recycling, however, remain insufficient, and millions of tons of plastics end up in landfills and oceans each year".

"According to the United Nations Environmental Program, between 22 percent and 43 percent of the plastic used worldwide is disposed of in landfills, where its resources are wasted, the material takes up valuable space, and it blights communities," the report adds.

With this year's Environment Day drawing closer, WION takes a look at some ingenious plastic-killing projects that not only provide an alternative to plasticware but also ensure a sustainable future.

Remember the age-old Indian practice of consuming food on a banana leaf or disposable cutlery made from dried leaves? That could be the way the world might head soon.

A German startup called the Leaf Republic creates durable, bio-degradable cutlery from waste leaves. The leaf-based cutlery is free from artificial agents and chemicals. The leaves are procured from wild vines of South America and Asia. A single plate comprises three layers, sewn and put together using palm fibres.

"It all started with a vision: Outdoor tableware, as renewable and biodegradable as a leaf falling from a tree. And here we are," mentions the official Leaf-Republic page on Kickstarter.

The waterproof leaf-based cutlery is washable can be used again. The plates, when discarded, take around a month to get decomposed completely.

Think of it, packaged drinking water is almost a necessity and requires truckloads of plastic. Experts from the Skipping Rocks Lab, London, UK imagined a world free from plastic and dreamt of creating balls of drinking water that can be consumed in its entirety, along with its packaging that contains no plastic.

Ooho, 'edible water bottles' were put on trial last year in April in London, UK. Tiny balls of water are, in reality, ice dipped in a mix of algae and calcium chloride. The entire ball of water can be gobbled down as it is, the product is completely digestible.

"The aim of Ooho is to provide the convenience of plastic bottles while limiting the environmental impact," Skipping Rocks Lab.


A world free from plastic looks like an uncharted territory that experts and technology enthusiast cannot wait to unravel.

This World Environment Day we root for similar innovative, sustainable, eco-friendly projects and that steer the planet on the path to recovery. If you have got interesting ways to cut down plastic-use in day-to-day routine, we will be happy to learn the same. Share your ideas in the comments box below.