Women take a stand in Washington, both for and against Barrett 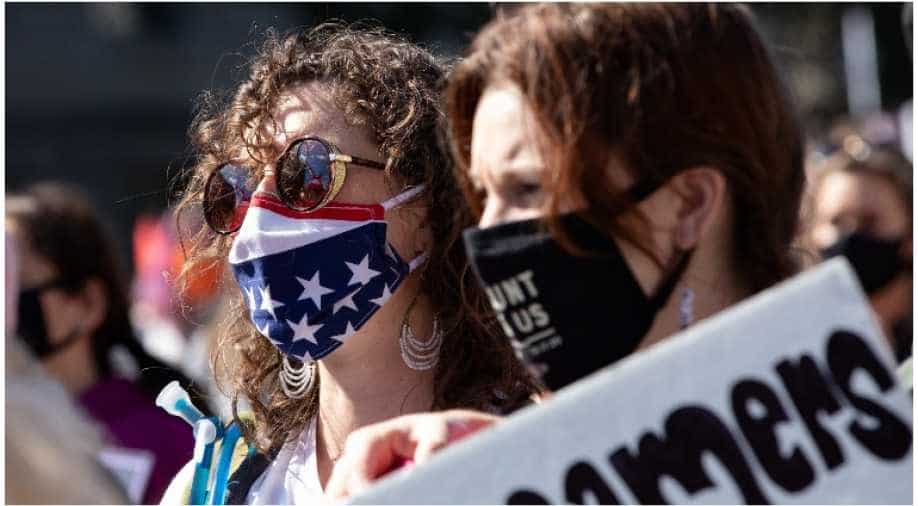 During the Senate confirmation hearing, Barrett declined to say whether she believed the landmark abortion case Roe v. Wade was correctly decided. She has a conservative voting record in abortion-related cases, and her Supreme Court nomination has been championed by conservatives

Women’s March protesters took to the streets of Washington on Saturday, galvanized by their opposition to President Donald Trump and his nomination of Judge Amy Coney Barrett to the Supreme Court.

Some women dressed in handmaid’s costumes, while others donned clothing reminiscent of Justice Ruth Bader Ginsburg’s Supreme Court regalia, just days before the Senate Judiciary Committee is expected to vote on Barrett’s nomination, paving the way for her confirmation. Marching less than a month before Election Day, Women’s March participants sought to call attention to the potential impact that a Justice Barrett, and four more years of the Trump presidency, might have on abortion rights and other issues.

“He’s trying to pack the courts with people who will subvert the will of Americans,” Rachel O’Leary Carmona, the Women’s March executive director, said of the president. “The election is all about the Supreme Court. It’s all about health care. It’s all about COVID.”

During the Senate confirmation hearing, Barrett declined to say whether she believed the landmark abortion case Roe v. Wade was correctly decided. She has a conservative voting record in abortion-related cases, and her Supreme Court nomination has been championed by conservatives.

“It’s really scary, since Justice Ginsburg passed away, what the future of women in this country looks like, especially when the nominee for her replacement doesn’t care about women’s rights,” said Tiffany Jones, a 37-year-old mortgage loan processor who drove to the march from Charleston, West Virginia.

Many marchers traveled far to attend Saturday’s event, despite the risks posed by the pandemic. Cierra Brooks, 19, drove with two college roommates for nine hours from Cullowhee, North Carolina.

“Our futures are totally affected by what happens,” Brooks said.

The crowd in Washington was far smaller than those at previous marches, which organizers attributed to the pandemic. This year, protesters were required to wear masks.

The march was met with a counterprotest in support of Barrett’s nomination, organized by the Independent Women’s Forum at the steps of the Supreme Court.

“The Women’s March does not represent all women,” said Sandy Chiong, a conservative activist. Barrett, she added, “is a role model for young women everywhere, an independent thinker.”