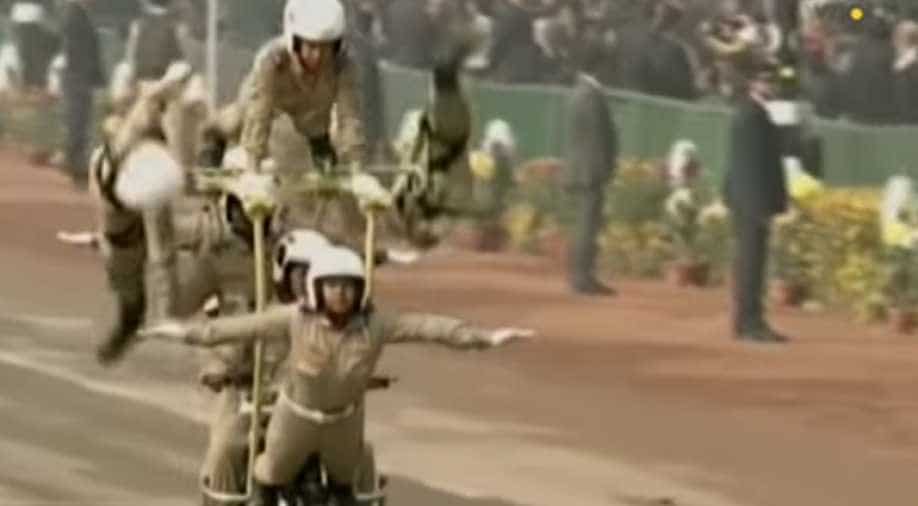 The all-women BSF bikers made their debut at the Republic Day parade on January 26. Image courtesy: DD National Photograph:( Others )

I hope ASEAN will be integral part of New India's transformation: PM Modi

An op-ed written by Prime Minister Narendra Modi has been published in 27 newspapers across the ASEAN countries.  All 10 heads of the ASEAN (Association of South East Asian Nations) countries were chief guests at the Republic Day parade this year. The presence of the 10 heads of state -- who are also here to attend the India-Asean commemorative summit -- is meant to symbolise India's
progression from its Look East policy to "acting east".

Modi's op-ed is headlined "Asean-India: Shared values and a common destiny", and is meant to mark the commemorative summit.

Corporal Nirala laid down his life after gunning down two terrorists in Jammu and Kashmir's Bandipora district in November.

After presenting the award to Corporal Nirala's wife Sushmanand and his mother Malti Devi at the Republic Day Parade, Kovind was seen wiping his face and eyes with his handkerchief.

India celebrated its 69th Republic Day on Friday with 10 ASEAN leaders as chief guests in attendance. With impressive march pasts and colourful tableaux, the day's ceremony commenced with Prime Minister Narendra Modi laying the wreath at the Amar Jawan Jyoti at India Gate to pay homage to the fallen soldier.

The highlight of the parade was motorcycle contingent 'Seema Bhawani' of the Border Security Force (BSF), comprising women personnel of the force that showcased their skills for the first time at the parade.

As per tradition, the BSF and the Army's bike-borne 'daredevils' end the parade on alternate years. But this time, members of the BSF's women motorcycle team replaced their male counterparts.

Congress president Rahul Gandhi on Friday attended the Republic Day Parade and took the designated seat in the sixth row, prompting an angry reaction from his party that accused the government of setting aside tradition and indulging in "cheap politics".

Gandhi was seated in the sixth row, along with Leader of Opposition in the Rajya Sabha Ghulam Nabi Azad.

"The Modi government's cheap politics is for all to see. The Congress president was deliberately made to sit in the sixth row, after initially assigning him a fourth-row seat, at the Republic Day celebrations by the arrogant rulers, who set aside all past traditions. For us the celebration of the Constitution is foremost," Congress' communications in-charge Randeep Surjewala said in a tweet posted in Hindi.

The external affairs ministry spokesperson said PM Modi and his Malaysian counterpart had an "engaging" discussion during which the two leaders focused on ways to enhance counter-terror cooperation and boost ties in areas of defence, trade and investment.