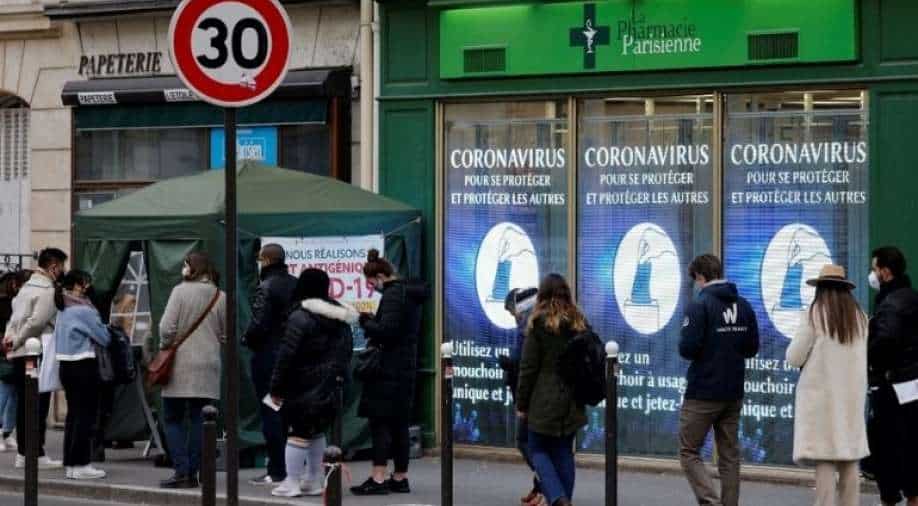 Pedestrians queue outside a pharmacy to receive Covid-19 antigenic tests in Paris as Covid-19 cases soar in Europe Photograph:( AFP )

The World Health Organization has said that in the next two months, over half of the people in Europe are on track to contract the Omicron variant of coronavirus.

According to Hans Kluge, regional director for WHO's European office, "At this rate, the Institute for Health Metrics and Evaluation (IHME) forecasts that more than 50 percent of the population in the region will be infected with Omicron in the next six to eight weeks."

It comes after the European Union agrees to take southern African countries such as Botswana, Eswatini, Lesotho, Mozambique, Namibia, South Africa, and Zimbabwe, off its no-travel list, despite surging cases of the Omicron variant.

They have made changes in their approach to the pandemic saying that although Omicron is much more contagious than the previous variant but it is less lethal.

They want to avoid severe lockdowns, with enormous damage to economies, saying that Omicron is putting far fewer people in hospital, not least because many or most are vaccinated.

Britain began using military personnel to support healthcare and alerted its biggest private health company that it might be required to deliver treatments including cancer surgery.

Even as France registered a record seven-day average of almost 270,000 cases a day, it eased testing protocols for schoolchildren, saying too many classes were closed.

In Italy, the challenge of nearly 13,000 health workers being absent with positive COVID-19 tests was compounded by suspensions for non-vaccination. Unvaccinated people in the country are barred from restaurants or taking domestic flights under new rules which exempt only those who have recently recovered from the virus.

Many European countries are suffering immediate staff shortages in essential services as Omicron drives a surge in positive tests.

The coronavirus has killed at least 5,486,519 people since the outbreak emerged in China in December 2019, as per data from Johns Hopkins University.