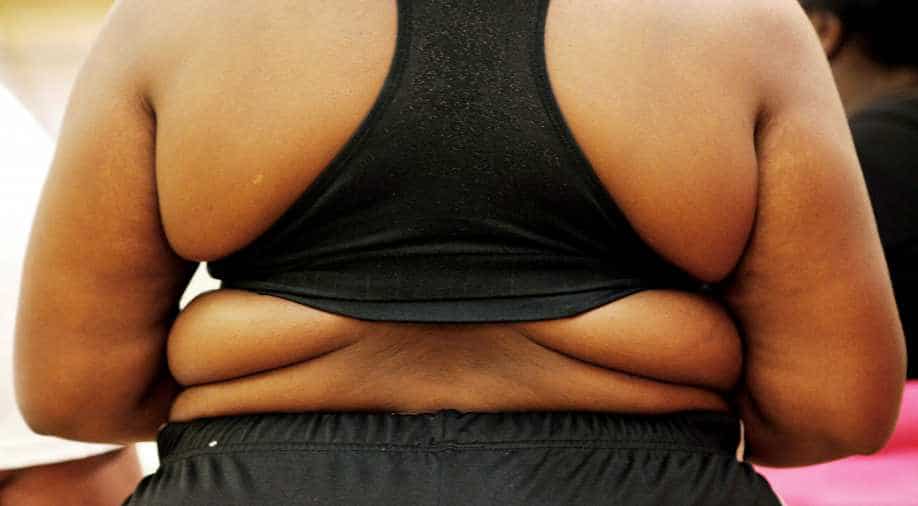 A player is pictured during his "Futbol de Peso" (Soccer of Weight ) league soccer match, a league for obese men who want to improve their health through soccer and nutritional counseling, in San Nicolas de los Garza, Mexico, September 16, 2017. Photograph:( Reuters )

An independent panel advising the World Health Organization (WHO) stopped short of recommending taxing sugary drinks on Friday after failing to reach a consensus.

The UN&nbspagency said it would pursue the fight against childhood obesity and diabetes, but activists had hoped for a strong endorsement for a tax to discourage consumption of sweetened beverages.

Some countries, such as Mexico, France and Britain, are already taxing sugary drinks and the WHO made a non-binding recommendation in October 2016 that governments should impose a 20 per cent tax.

Sania Nishtar, a former Pakistani health minister who co-chaired the panel, declined to give details of how its 21 members - who include heads of states and health ministers - voted. However, she said some of the evidence in favour of a tax had been queried.

"The reason behind the opposition of one commissioner, in particular, was with regard to the strength of evidence (on sugar)," she said, without naming the person.

Asked about any industry lobbying or influence on the panel's decision not to back a tax, Nishtar replied: "We did not have any input from the sugar industry."

"One thing I would like to assure you is the WHO position cannot change because of this report," he told a news conference.

"This is because youth consumption of sugar is associated with obesity. At the same time, taxing sugar was shown to reduce consumption in many countries. Not only that, the money from tax can be used to strengthen the health system," he said.

He established the WHO Independent High-Level Commission on Noncommunicable Diseases last year to provide advice on how to reduce premature deaths from such diseases by one third by 2030.

The panel on Friday called on governments to increase efforts to fight an explosive epidemic of non-communicable diseases in low and middle-income countries which account for 71 per cent of all deaths globally, or 41 million deaths a year.

To achieve progress, "governments should work with: food and non-alcoholic beverage companies in areas such as reformulation, labelling, and regulating marketing", its report, which goes to a United Nations summit in September, said.

The commission made six recommendations in its report, including for government heads to take responsibility for disease reduction and to increase regulation. It did not mention taxes specifically.

Britain's sugar tax on soft drinks came into effect in April and led manufacturers to reformulate their products beforehand to be below the levy's sugar threshold.

France and Hungary have imposed taxes on drinks with added sugar, while Ireland gained EU approval in April.