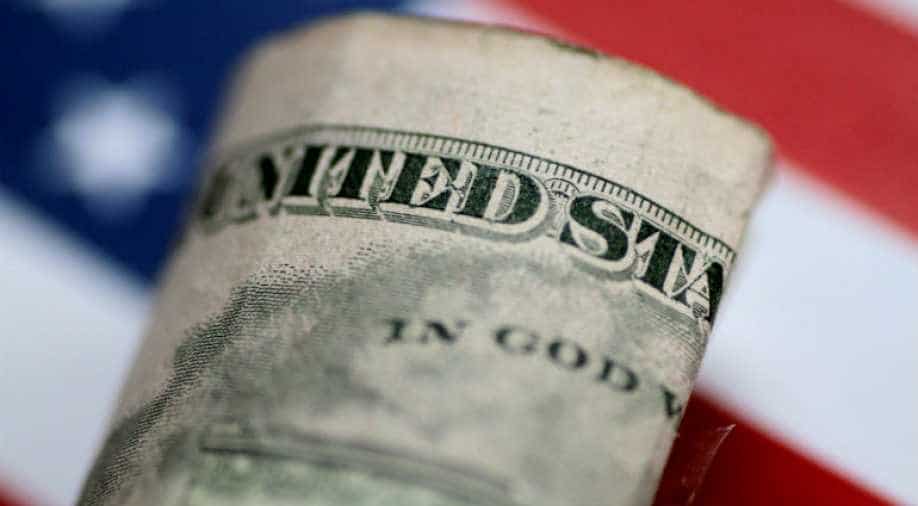 A US five dollar note is seen in this illustration photo. Photograph:( Reuters )

Much of the uncertainty surrounds prospects for a resolution of the trade tensions between the United States and China.

White House officials pushed back on Sunday against concerns that economic growth may be faltering, saying they saw little risk of recession despite a volatile week on global bond markets, and insisting their trade war with China was doing no damage to the United States.

Trump administration economic adviser Larry Kudlow said trade deputies from the two countries would speak within 10 days and "if those deputies meetings pan out...we are planning to have China come to the USA" to advance negotiations over ending a trade battle that has emerged as a potential risk to global economic growth.

But even with the stalks stalled for now and the threat of greater tariffs and other trade restrictions hanging over the world economy, Kudlow said on "Fox News Sunday" the United States remained "in pretty good shape."

"There is no recession in sight," Kudlow said. "Consumers are working. Their wages are rising. They are spending and they are saving."

His comments follow a rocky week in which concerns about a possible US recession began to drive financial markets and seemed to put administration officials on edge about whether the economy would hold up through the 2020 presidential election campaign. Democrats on Sunday argued Trump's trade policies are now posing an acute, short-term risk.

US stock markets tanked last week on recession fears with all three major US indexes closing down about 3% on Wednesday only to pair their losses by Friday due to expectations the European Central Bank might cut rates.

The Fed and 19 other central banks have already loosened monetary policy in what Fitch Ratings last week described as the largest shift since the 2009 recession.

Markets are expecting even more cuts to come. For a brief time last week bond investors demanded a higher interest rate on 2-year Treasury bonds than for 10-year Treasury bonds, a potential signal of lost faith in near-term economic growth.

Much of the uncertainty surrounds prospects for a resolution of the trade tensions between the United States and China.

The administration last week delayed the imposition of some of its planned tariffs to avoid disrupting the upcoming Christmas shopping season. President Donald Trump told reporters he had a call with China’s President Xi Jinping scheduled soon. It had not taken place as of Saturday night.

"We have the strongest economy in the world and money is coming here for our stock market. It's also coming here to chase yield in our bond markets," Navarro told ABC's "This Week."

For bond markets, the sort of movement Navarro described is often driven by trouble - in this case the possibility that the trade battle with China is lasting far longer than expected and becoming disruptive to business investment and growth.

Still, Navarro said the tariffs on Chinese goods, "are not hurting anybody here."

The US economy does continue to grow and add jobs each month. Retail sales in July jumped a stronger-than-expected 0.7%, the government reported last week, and Kudlow said that number showed that the main prop of the US economy is intact.

But manufacturing growth has slowed and lagging business investment has become a drag. Globally, flagging trade flows have pushed the German economy toward recession, and dampened growth in China.

A slowdown would be bad news for Trump, who is building his 2020 bid for a second term around the economy's performance. He told voters at a rally last week they had "no choice" but to vote for him to preserve their jobs and investments.

Despite talking up the economy, the president and his advisers have repeatedly accused the Fed of undermining the administration's economic policies. On Sunday, Kudlow again pointed the finger at the central bank, describing rate hikes through 2017 and 2018 as "very severe monetary restraint."

The Fed hiked rates seven times over those two years as part of a plan to restore normal monetary policy following the emergency steps taken to battle the 2007-2009 global financial crisis and recession.

Even with those steps, the Fed's target interest rate has remained well below historic norms, and policymakers have started cutting rates in response to growing global risks.

Democratic presidential candidates on Sunday joined the many economic analysts who have said the administration's sometimes erratic policies on trade -- at one point threatening tariffs on Mexico over immigration issues -- are to blame for increased uncertainty, disappointing business investment and market volatility.

“I’m afraid that this president is driving the global economy and our economy into recession," Democratic candidate Beto O’Rourke said on NBC's "Meet the Press."

Speaking to CNN's "State of the Union" on Sunday, Democratic South Bend, Indiana Mayor Pete Buttigieg criticized the administration for failing to deliver a deal with China.

"There is clearly no strategy for dealing with the trade war in a way that will lead to results for American farmers, or American consumers," he said.