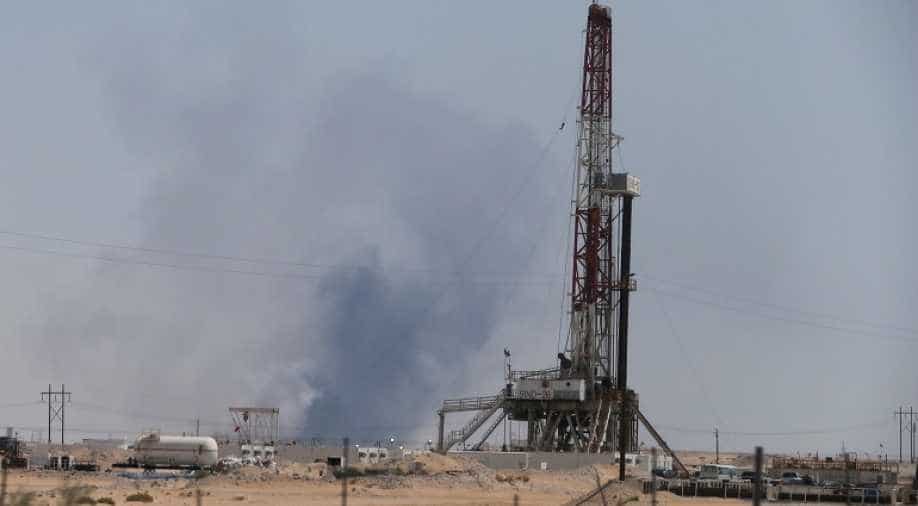 Smoke is seen following a fire at Aramco facility in the eastern city of Abqaiq, Saudi Arabia, September 14, 2019. Photograph:( Reuters )

Oil prices saw their biggest daily gain since the 1991 Gulf War on Monday after the attacks halved output in the world's top crude exporter.

The weapons used to strike Saudi oil facilities were Iranian-made, the Riyadh-led coalition said Monday, heightening fears of regional conflict after the US hinted at a military response to the assault.

Yemen's Iran-aligned Huthi rebels claimed responsibility for the strikes but Washington has squarely blamed Iran, with President Donald Trump saying the US is "locked and loaded" to respond.

Saudi's energy infrastructure has been hit before, but this strike was of a different order, abruptly halting 5.7 million barrels per day (bpd) or about six per cent of the world's oil supply.

The Saudi-led coalition, which is bogged down in a five-year war in neighbouring Yemen, reiterated the assessment that the Huthis were not behind it, pointing the finger at Iran for providing the weapons.

Russia urged "all countries to avoid hasty steps or conclusions that could exacerbate the situation" while the European Union stressed all sides should show "maximum restraint".

China also called on the US and Iran to "exercise restraint... in the absence of a conclusive investigation or verdict."

"All indications are that weapons used in both attacks came from Iran," coalition spokesman Turki al-Maliki told reporters in Riyadh, adding they were now probing "from where they were fired".

"This strike didn't come from Yemen territory as the Huthi militia are pretending," Maliki said, adding an investigation had been opened.

He labelled the Huthis "a tool in the hands of the Iranian Revolutionary Guards and the terrorist regime of Iran".

The rebels said they fired 10 drones at the Saudi infrastructure, but the New York Times reported that US officials had satellite images showing the attacks -- possibly with drones and cruise missiles -- had come from the north or northwest.

It indicated they were sourced in the northern Persian Gulf, Iran or Iraq, rather than Yemen.

The assault on the heart of Saudi Arabia's oil industry, which engulfed the facilities in flames, has been condemned by Washington as an "unprecedented attack on the world's energy supply".

Oil prices saw their biggest daily gain since the 1991 Gulf War on Monday after the attacks halved output in the world's top crude exporter, fuelling fresh geopolitical and growth fears.

Europe's benchmark Brent crude surged by 20 percent and US counterpart WTI by 15 percent as commodities trading got underway.

Both contracts later came off their peaks, but were still up more than 10 percent on the day by the mid-afternoon in Europe.

US Energy Secretary Rick Perry insisted world oil markets still had sizeable reserves saying the market has "a fairly substantial amount of oil out there available".

Saudi Energy Minister Prince Abdulaziz bin Salman on Sunday said the kingdom would use its vast inventories to partially compensate for the lost production, and the US also authorised the release of its reserves.

"Growing tensions in the Middle East are another headwind for the global economy in already uncertain times, and a full-blown conflict could trigger another leg in the global downturn," said Jennifer McKeown, head of Global Economics at Capital Economics.

The kingdom also has a spare capacity of around two million bpd that it can draw on at times of crisis.

The attack is a major test for Saudi Arabia as it could dampen investor confidence in Aramco's upcoming two-stage initial public offering (IPO), a mammoth listing that the government hopes will generate up to $100 billion.

Saudi authorities are considering whether to delay an IPO for the oil giant, people with knowledge of the matter said.

"They're in the process of assessing the damage. It's a possibility but it's still very early," said one of the sources who spoke on condition of anonymity.

The IPO, earlier scheduled for 2018, has already been mired in delays as it reportedly struggled to reach a $2 trillion valuation desired by Saudi rulers.

Saudi authorities have sought to calm jittery markets, with the Energy Intelligence specialist newsletter citing industry sources as saying Aramco was "close to restoring as much as 40 percent" of the lost production, or about 2.3 million barrels per day (bdp).

The Wall Street Journal cited people familiar with the damage estimates as saying the targeted facilities would take weeks to return to full production capacity.

The real extent of the damage at the facilities however remains unclear.

All eyes are on official word from the Saudis on the situation, which could offer reassurance to world markets.