Watch: Timelapse video of deforestation in the Amazon rainforest 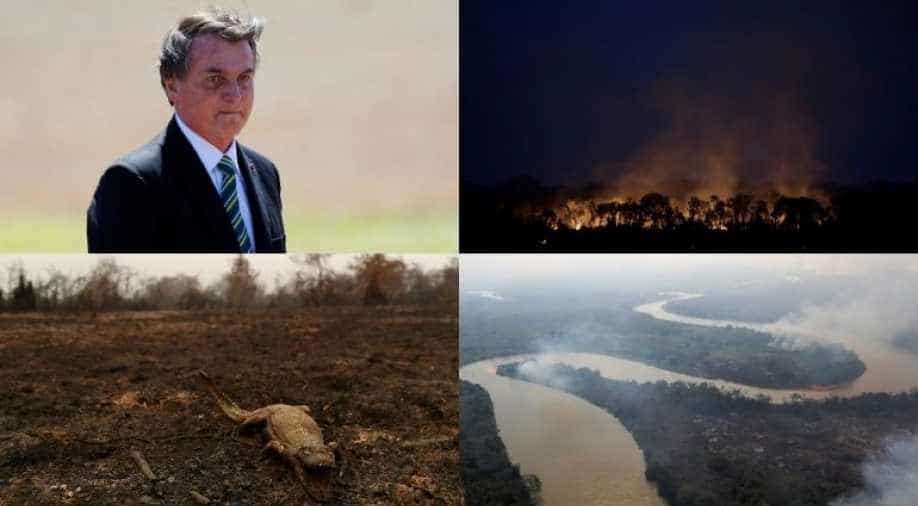 Environmental advocates blame right-wing Bolsonaro, who has rolled back environmental enforcement and called for mining and farming protected areas of the Amazon, for emboldening illegal loggers, ranchers and miners to destroy the forest

Deforestation in Brazil's Amazon rainforest fell in September for the third straight month compared to a year ago, government data showed on Friday, but destruction remains far higher than before President Jair Bolsonaro took office in 2019.

Forest clearances in the world's largest rainforest are down 10 per cent in the first nine months of 2020, compared to the same period a year ago, according to data released by government space research agency INPE.

September was the 7th highest month for deforestation on record, outstripping any month in the two years preceding Bolsonaro's inauguration.

A heartwrenching video posted by a YouTube channel Planet posted the rate of deforestation at the rainforest from May 2017 to September 2020.

"The deforestation numbers continue to be terrible and unacceptable," said Marcio Astrini of the Climate Observatory NGO, who said deforestation alerts used to be measured in hundreds of square kilometers and now they are reported in the thousands.

"Everything that brought us to this scenario of environmental chaos, of uncontrolled deforestation and crime taking hold in the Amazon continues to exist," he said.

Environmental advocates blame right-wing Bolsonaro, who has rolled back environmental enforcement and called for mining and farming protected areas of the Amazon, for emboldening illegal loggers, ranchers and miners to destroy the forest.

Bolsonaro says he aims to lift the region out of poverty and that the amount of forest still standing shows Brazil is a model for conservation.

Last week, U.S. Democratic presidential candidate Joe Biden called for a world effort to offer $20 billion to end Amazon deforestation and threatened Brazil with unspecified "economic consequences" if it did not "stop tearing down the forest."

Despite the consecutive months of falling deforestation, Brazil's official deforestation measure for 2020 is expected to show a rise.

Deforestation is measured annually by how much forest has been cleared as of the end of July, as compared to the previous August. Those months have less cloud cover that interferes with the satellite images. For that period, deforestation rose 34.6% to 9.216 square kilometers, the preliminary data show.

The final data is generally far higher than the preliminary figures. Brazil's Amazon Environmental Research Institute (IPAM) estimates the final deforestation figure will be above 14,000 square kilometers. That's an area larger than the U.S. state of Connecticut.