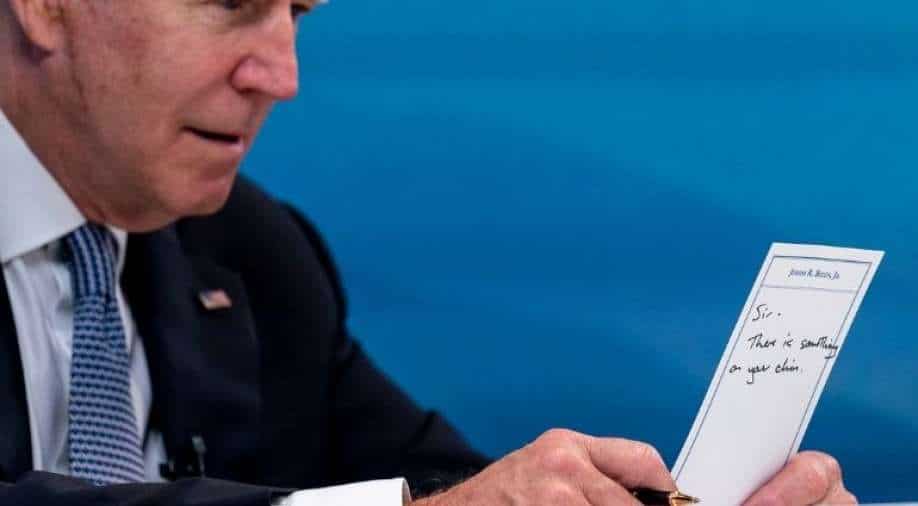 President Joe Biden holds a card handed to him by an aide that reads 'Sir, there is something on your chin'. Photograph:( Twitter )

US president Joe Biden accidentally revealed an awkward note from his staff telling him there was something on his face during a governors meeting.

During a meeting with governors on Friday, US President Joe Biden unintentionally revealed a note from his staff informing him that he had something on his face after a yellow mark was noticed on his chin.

When the President received the message, he was in the middle of a meeting on the White House grounds on wildfire prevention.

A video showing Biden's staffer handing him the message as Vice President Kamala Harris was speaking to the governors was quickly published on Twitter by the Republican National Committee (RNC).

“After a staffer gives Joe Biden a note saying, ‘there’s something on your chin,’ Biden wipes his chin,” tweeted the account, “[He] Then appears to put whatever was on his chin in his mouth?”

After a staffer gives Joe Biden a note saying, “there’s something on your chin,” Biden wipes his chin.

Then appears to put whatever was on his chin in his mouth? pic.twitter.com/VvN17i4IWY

However, the president flipped the sheet of paper over, exposing the message to everybody.

He was also seen wiping his chin and then inspecting his hand to see whether he had properly wiped it off in the footage.

On Twitter, his opponents mocked him for the gaffe, referring to his age — a common taunt of his predecessor, Donald Trump, who was known for making blunders while in government.