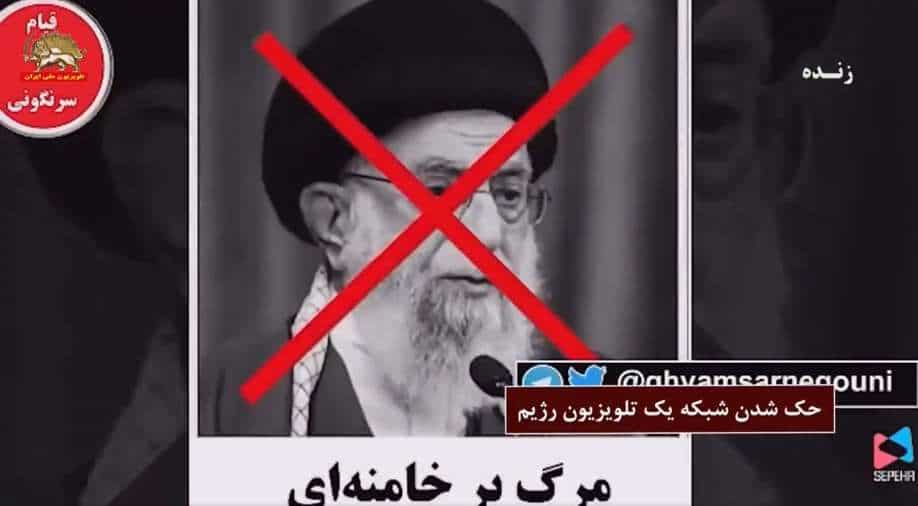 Iran’s state TV authorities acknowledged the incident as a “hack” and said that they would investigate the intrusion.

For several seconds on Thursday, viewers across the country witnessed the image of Khamenei crossed out with red lines appearing on the screen while a man shouted, “Salute to Rajavi, death to Khamenei”.

Rajavi and his wife Maryam Rajavi lead the group’s political wing the National Council of Resistance of Iran (NCRI) in Paris.

Later, a speech of Rajavi briefly plays over the images, where he was heard saying, ‘Today, we still honour the time that we declared death to the reactionary. We stood by it.”

Massoud Rajavi hasn’t been seen publicly in nearly two decades and is presumed to have died. Maryam Rajavi now reportedly runs the MEK.

Iran’s state TV authorities acknowledged the incident as a “hack” and said that they would investigate the intrusion.

They said that the attack may have been carried out with help from foreigners.

However, the MEK group distanced itself from the incident.

Speaking to news agency The Associated Press, Shahin Gobadi, a Paris-based MEK spokesperson said, “We, like you, were just informed about the issue.”

“It appears that it was done by supporters of the MEK and resistance units within the regime’s radio and television stations,” he said, without directly claiming responsibility.

He offered no evidence to support his assertion, AP reported.

Widely regarded as a cult, the MEK was once designated as a terrorist organisation by the US and UK,

The MEK began as a Marxist group opposing the rule of Shah Mohammad Reza Pahlavi. It claimed and was suspected in a series of attacks against US officials in Iran in the 1970s, something the group now denies.

It supported the 1979 Islamic Revolution, but soon had a falling out with Khomeini and turned against the clerical regime. It carried out a series of assassinations and bombings targeting the young Islamic Republic.

Since its exile from Iran in the early 1980s, the MEK has been committed to the overthrow of the Islamic republic.

The MEK later fled into Iraq and backed dictator Saddam Hussein during his bloody eight-year war against Iran in the 1980s. That saw many oppose the group in Iran.

Although largely based in Albania, to this day the group claims to operate a network inside Iran.