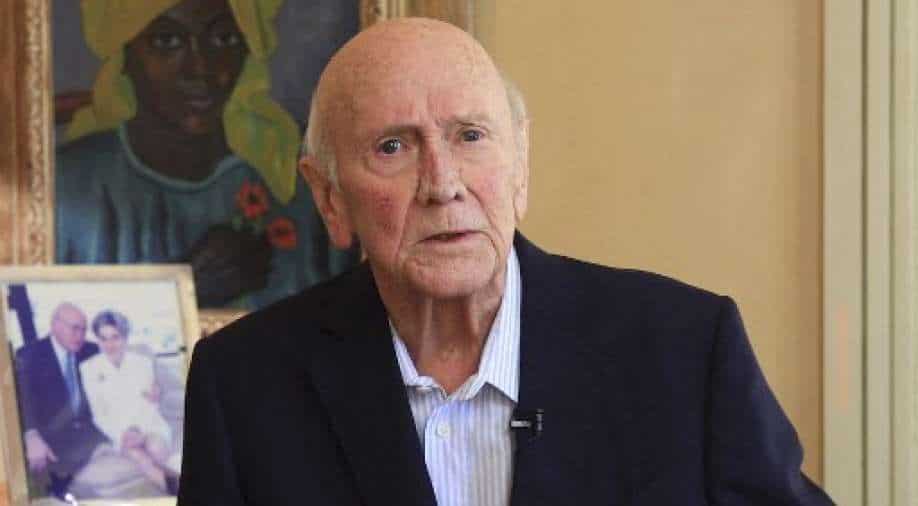 The FW de Klerk Foundation, moments after announcing his passing, shared a video of the 85-year-old’s last message to citizens

In his final message, hours before his death, South Africa’s last white president Frederik Willem (FW) de Klerk apologised to the people of different ethnicities who had to bear the brunt under the Apartheid system in the country.

The FW de Klerk Foundation, moments after announcing his passing, shared a video of the 85-year-old’s last message to citizens. It is unknown when was the video recorded.

“I, without qualification, apologise for the pain and the hurt and the indignity and the damage that apartheid has done to black, brown and Indians in South Africa. I do so, not only in my capacity as the former leader of the National Party, but also as an individual,” he said.

Stating that he is proud of the constitution that was adopted in the early 1990s after his National Party took far-reaching measures to ensure a new dispensation could bring justice to all, de Klerk said, “Together with most other South Africans, I’m proud of our constitution. The constitution which we hammered out in the negotiations which started in 1990 and which culminated in the final constitution of 1996. I fully associate myself with the values and principles enshrined in our constitution.”

He also cautioned that the country is facing various challenges. “I’m deeply concerned about the undermining of many aspects of the constitution, which we perceive almost day-to-day,” he said.

FW De Klerk recorded this video which was released after his death. pic.twitter.com/soUuArURaw

He then finished off his message by expressing hope that South Africa would be able to overcome many challenges that is still plaguing society.

"The road forward is a difficult one. But I firmly believe that if we take hands and if all the reasonable people in South Africa put their heads together, we can overcome the challenges we face and we can fulfil the tremendous potential that South Africa has. May the South African nation show the courage and the ingenuity to achieve this,” de Klerk said.

De Klerk died on Thursday. He was diagnosed in March with mesothelioma, a type of cancer that affects the tissue lining the lungs. De Klerk had announced his diagnosis on his 85th birthday on March 18 this year.

He is survived by his wife Elita, children Jan and Susan, and grandchildren.

De Klerk is globally seen as a politician who successfully negotiated a peaceful transfer of power from white-minority rule to a Black-majority democratic government. He shared the Nobel Peace Prize with Mandela in 1993.

But in South Africa, many saw him as a controversial figure who had shown little remorse for the crimes committed during the apartheid regime.