Watch: 3-year-old girl flung into the air by a humongous kite in Taiwan 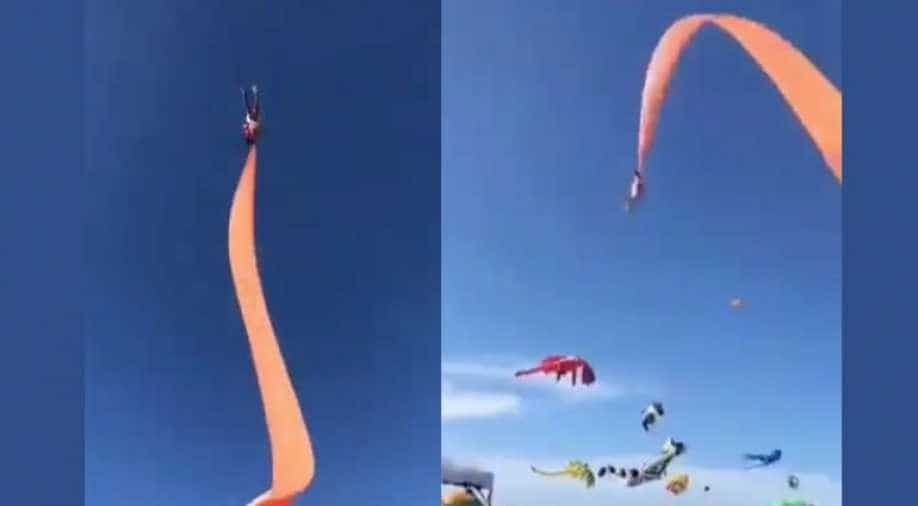 3-year-old girl flung into the air by a humongous kite in Taiwan | User @scale_banana Photograph:( Twitter )

The kid became entangled in the strings attached to the kite, and owing to the wind, was seen ‘flying

Taiwan has been in the news a lot lately, especially owing to the strained relationship with China, and the newly found global support.

But something even more uncanny happened recently. A three-year-old girl recently flew high with the kites, literally. The kid was holding on to the kite strings and was lifted above into the air with the kite.

The kid was not harmed in the process, and was reportedly participating in a kite festival on Sunday in Taiwan’s coastal town called Nanliao.

In the video, one can see her holding on to a long orange kite, and her being lifted off the group momentarily.

Watch the clip below

A kid in Taiwan accidentally got latched onto a kite. Fortunately the kid is safe. pic.twitter.com/ftLsyglxBd

The kid became entangled in the strings attached to the kite, and owing to the wind, was seen ‘flying’.

According to local media, the girl was rescued unharmed, but was naturally terrified.

Here's another clip of the incident

Terrifying moment a child at a kite festival in Hsinchu, northern Taiwan gets tangled up in a kite and lifted fifty feet up into the air. pic.twitter.com/YAPL545yAn

In the aftermath of the mishap, Lin Chih-chien, the mayor of Hsinchu city issued a public apology, while adding that all activities have been halted for now, owing to the high paced wings in the area.

Additionally, the girl was escorted to the hospital, with the help of the municipal authorities. The kid had some scratched on her neck, but no major injuries were spotted.

The mayor promised to review the incident while adding that such accidents will be prevented from happening again.