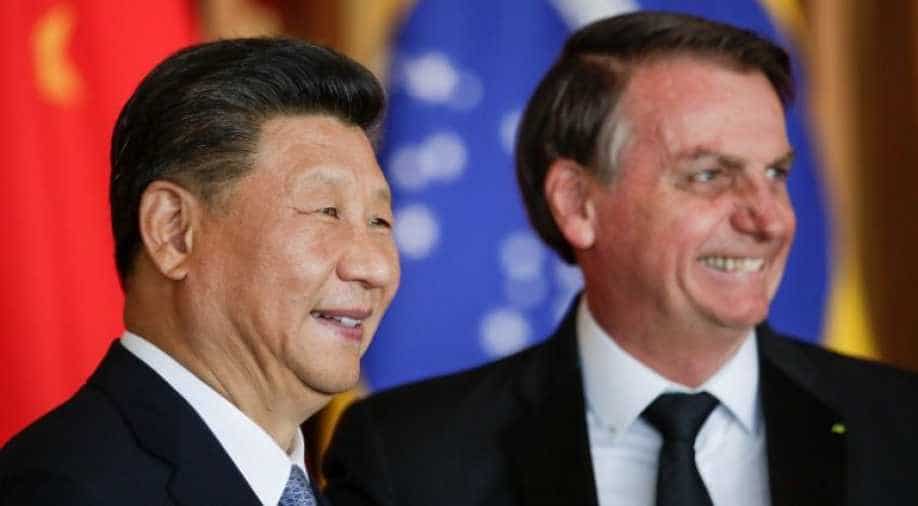 China's President Xi Jinping and Brazil's President Jair Bolsonaro pose as they deliver a joint statement after a bilateral meeting during the BRICS summit in Brasilia, Brazil November 13, 2019. Photograph:( Reuters )

In the post-pandemic era, Beijing must acknowledge that sinophobia is the new normal. China is under the illusion that its arm-twisting methods still work.

However, this time, it’s got a shock in Brazil. The Chinese envoy in Brazil sent a letter to Brazil’s members of Parliament. In the letter, he asked them not to congratulate Taiwan’s president Tsai Ing-wen but one of the MPs leaked the letter on Twitter.

The courageous Congress member Pablo Eduardo Martins called the letter an affront and as one of Brazil’s legislators, he took offence to the diktat.

With the letter, China questioned Brazil’s sovereignty and received a fitting reply.

Pablo Eduardo Martins may have been late in wishing Taiwan’s pro-independence President Tsai Ing-wen but, his wishes were gladly accepted. Tsai In-wen, who was recently sworn in for her second term as the president replied to the tweet herself.

With the tweet, Martins has sparked a Twitter trend- it’s called #vivaTaiwan. Brazilians are standing beside their lawmakers in defending their country’s sovereignty.

Thank you to all of our friends in #Brazil for your kind congratulations, and I hope you are all staying safe & healthy. #VivaTaiwan 🇹🇼 #VivaBrazil 🇧🇷

The long live Taiwan Twitter trend has schooled China to keep away from a country’s internal matters. An internal report had warned all Chinese officials of a global anti-China backlash. China should have taken its own report seriously.

Now Beijing is unhappy over what’s happening in Brazil. The Chinese state-run media is running an anti-Brazil campaign. It says Brazil’s politicians are trying to scapegoat China for the rapidly worsening economic situation. The article makes it a point to remind Brazil about trade ties.

It is not the first instance of anti-China rhetoric in Brazil. After US President Donald Trump called the coronavirus the Chinese virus, Brazil President Jair Bolsonaro’s son too called it the Chinese virus. China did not take it lightly, in response, the Chinese consul in Rio de Janeiro wrote an op-ed column for the ‘O Globo’ newspaper.

The headline said to value the China-Brazil relations or, face consequences. The consul wrote should any country insist on being China’s enemy, it will be its most sophisticated enemy! China even managed to elicit an apology. President Jair Bolsonaro himself was a strong critic of China during his campaign, he has now gone soft ever since.

In November, he had to ask China to buy Brazilian oil in an auction he thought would fail to attract bidders, perhaps that’s how China manages to tighten its grip over leaders in foreign countries - play a good Samaritan in times of a crisis and then put them in servitude by giving out alms in times of need.

But, #vivaTaiwan has surely taught China an embarrassing lesson. China can pressurise leaders to get its way, but, what if the people in a foreign land defy your power? that’s the power of the freedom of people. Hong Kong and Taiwan are examples enough to show China has no idea what it means.