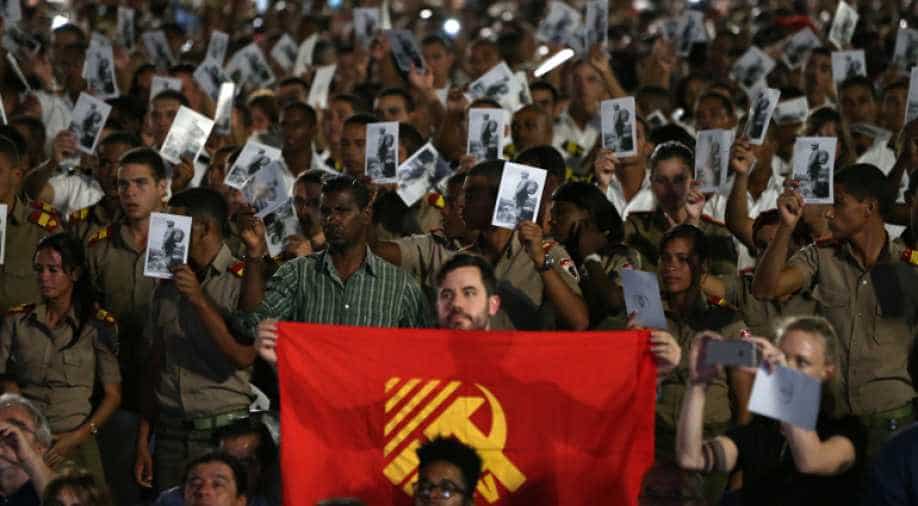 Mourners hold a large image of Fidel Castro as they pay tribute to him at a massive rally at Revolution Square in Havana. Photograph:( Reuters )

A military jeep carried the ashes of Fidel Castro along streets lined with flag-waving Cubans in Havana on Wednesday, starting a four-day journey to his final resting place across the island.

After two days of tributes in Havana, the "caravan of freedom" departed on a 950-kilometer (590-mile) trek retracing the route of the revolution's victory tour of 1959.

The flag-covered urn rested on a small olive-green trailer, flanked by white flowers and protected by a glass case as Havana bid farewell to the communist icon who ruled the island with an iron fist for almost half a century.

Hundreds of thousands chanted "I am Fidel!" and "viva Fidel!" as the "caravan of freedom" headed on long trip that will end with a final ceremony in the eastern city of Santiago de Cuba on Sunday.

Senior officials of the government and Communist Party, and Castro's longtime partner, Dalia Soto del Valle, attended the farewell ceremony at the armed forces ministry before the caravan headed out.

Cubans were observing the fifth of nine days of mourning for Castro following his death on Friday at age 90. Castro ruled from 1959 until an illness forced him to hand power to his brother, Raul, in 2006.

"It's very moving to say goodbye to a person who meant so much but who lived long enough to accomplish what he wanted," said a tearful Esperanza Pares, 86.

Castro's ashes will take the reverse route that his band of guerrilla fighters took after defeating dictator Fulgencio Batista.

From January 2 to January 8, 1959, the bearded rebels traveled from Santiago to Havana, stopping in Castro's home region, Holguin, as well as the cities of Camaguey, Las Tunas, Sancti Spiritus, Santa Clara and Matanzas.

One of the most symbol-filled stops of this last trip will be in Santa Clara, where the ashes of his Argentine comrade-in-arms, Ernesto "Che" Guevara, rest.

The urn will be laid to rest at the Santa Ifigenia cemetery, next to the mausoleum of 19th century independence hero Jose Marti.

The trip follows two days of tributes in Havana where hundreds of thousands were encouraged by the government to view a picture memorial to Castro at the Revolution Square.

The commemorations in the capital ended with a massive rally Tuesday night at the square attended by Latin American, African and Caribbean leaders, along with the Greek prime minister -- the only European leader at the event.

Raul Castro, 85, thanked the "countless gestures of solidarity and affection from around the world" and ending with the revolutionary battle cry, "Until victory, always!"

But the presidents of Western powers, and even friendly nations including Russia, China and Iran, sent deputies in their place.

The absences underscored the divisive legacy of a leader who defied the United States, backed guerrilla movements in Latin America and deployed his army to conflicts in Africa during the Cold War.

Leftist Latin American leaders vowed to carry the torch of Castro's revolution as they addressed the rally.

Allies praised Castro in almost religious tones, with Bolivian President Evo Morales saying, "Fidel is not dead. ...Fidel is more alive than ever, more necessary than ever."

Maduro is facing a deep economic crisis and fighting opposition attempts to hold a recall referendum, while Brazil's Dilma Rousseff was impeached in August and a conservative took over in Argentina last year.

US President Barack Obama, who along with Raul Castro ended decades of enmity to restore diplomatic relations, did not attend the rally, sending an advisor and a diplomat without the status of a "presidential delegation."

"We continue to have some significant concerns about the way the Cuban government currently operates, particularly with regard to protecting the basic human rights of the Cuban people," White House spokesman Josh Earnest said.