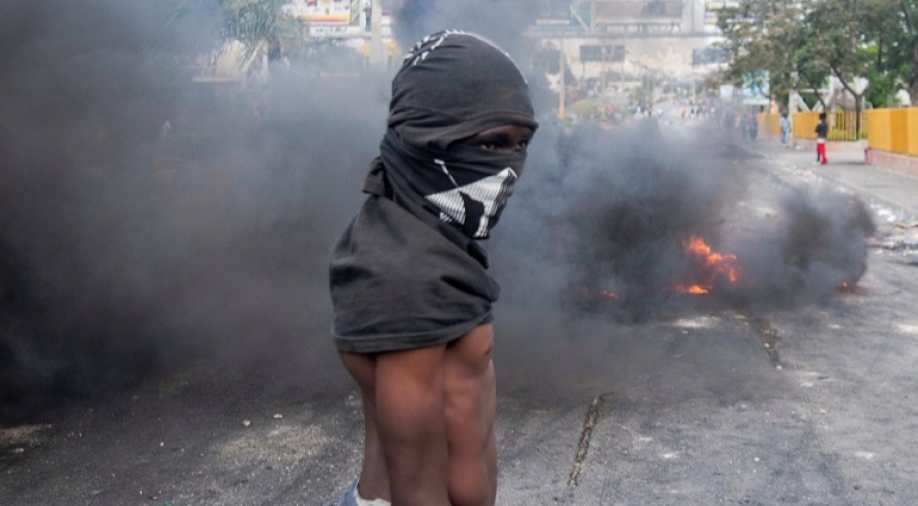 A person walks pass a burning blockade during a protest in Port-au-Prince, Haiti. Photograph:( Agencia EFE )

Firefighters and police were called when demonstrators in Delmas, just south of the capital, tried to set fire to the headquarters of the state radio channel.

The political crisis gripping Haiti entered its seventh day on Wednesday amid violent protests by opposition groups demanding the resignation of President Jovenel Moise which have left at least nine people dead.

The demonstrators, mostly young men, returned to the streets of the capital Wednesday to call for the resignation of Moise, who remains silent and out of sight since his appeal for dialogue on February 9, as he faces increased pressure to step down from several sectors of the opposition.

At least one man was killed on Wednesday and several people, including a journalist from the daily Le Nouvelliste, were injured during violent clashes around the National Palace between protesters, who threw stones, and policemen, who responded with gunshots.

Firefighters and police were called when demonstrators in Delmas, just south of the capital, tried to set fire to the headquarters of the state radio channel.

Faced with the climate of uncertainty and insecurity across the nation, many embassies have suspended their consular services, while others were closed.

Prime Minister Jean Henry Ceant convened a council of ministers for Wednesday, while foreign minister Edmond Bocchid was in Washington to discuss the situation with National Security Advisor John Bolton.

Assad Volcy, one of the opposition leaders, told EFE that "there is no turning back. We have to solve the problem of inequality and hunger".

Senator Youri Latortue, a former ally of Jovenel Moise, called on the president to resign "to avoid chaos and more blood."

Most schools have been closed since the protests began on February 7, while public transport and local commerce have almost ground to a halt.

Many businesses and fuel stations have been looted, and public and private vehicles burned, as the security situation in the impoverished Caribbean nation threatens to spiral out of control.

The streets of the country's capital, Port-au-Prince are filled with garbage and barricades, some of them burning, making it impossible for traffic to pass.

Leaders of opposition parties and civil society groups have asked the demonstrators to intensify their actions until Moise resigns.

So far, the only pronouncement of the international community came this weekend through the Core Group, made up of the Deputy Special Representative of the Secretary-General of the United Nations, the ambassadors of Germany, Brazil, Canada, Spain, the United States, France, the European Union and the special representative of the OAS, who called for dialogue to seek a solution to the political and economic crisis.

The protests are taking place in the midst of a severe economic downturn, which was aggravated this year by a sharp depreciation of the gourde, Haiti's official currency, and an electricity supply crisis resulting from the shortage of gasoline.

Haiti's economy, where more than half of its 10 million inhabitants survive on less than $2 a day, grew by just 1.4 per cent in 2018, one of the lowest growth rates in the region and well below the 2.2 per cent forecast at the beginning of last year, which was later reduced to 1.8 percent.

Demonstrators also demand justice for alleged irregularities in the Petrocaribe program, through which Venezuela supplies oil to Haiti at favourable prices.

An audit presented last week by the Court of Auditors revealed irregularities between 2008 and 2016 in this programme and pointed to 15 former ministers and current officials who are involved in this case, as well as a company run by Moise before he became president

An interview is sometimes a child's play. This viral video says so