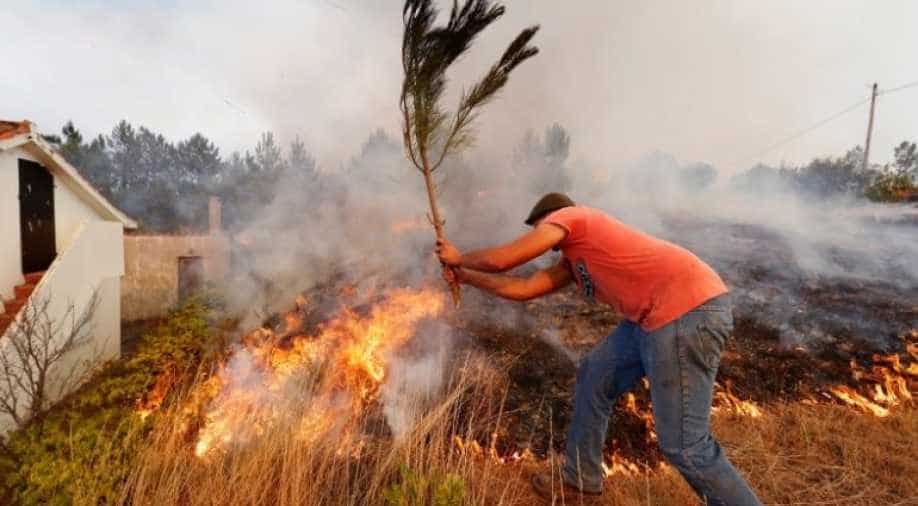 Villagers help to put out a forest fire at the small village of Colos, Portugal. Photograph:( Reuters )

The wildfire was easing as the wind loses strength and temperatures drop during the night, a Civil Protection official told reporters in the early hours of Monday.

Blazes in central Portugal reached houses on Sunday, forcing locals to take matters into their own hands as they tried to protect their homes from huge wildfires with buckets of water and hosepipes as strong winds fanned the flames.

One of the three wildfires which broke out on Saturday in Castelo Branco, a district 225 kilometres (139 miles) northeast of Lisbon, is still burning. Having spread to the nearby Santarem district, they threatened several villages in the Vila de Rei and Macao municipalities.

Portugal's Civil Protection said some houses were destroyed by the flames but did not give a specific number.

Around 870 firefighters are on the ground according to the National Authority for Civil Protection. However, a Reuters photographer in Vila de Rei said few firefighters were visible.

The wildfire was easing as the wind loses strength and temperatures drop during the night, a Civil Protection official told reporters in the early hours of Monday.

Authorities have evacuated villages and fluvial beaches as a precaution and 30 people have been injured. One civilian is in serious condition and remains hospitalised with first and second-degree burns.

The fires stirred memories of a devastating wildfire in the central town of Pedrogao Grande in June 2017, the worst disaster in modern Portuguese history, which killed 64 people and injured more than 250.

"The fire is out of control, without resources on the ground, and the population at risk," Vasco Estrela, the mayor of Macao, told Portuguese radio station TSF on Sunday. "We never thought we would live through this again."

Images broadcast by Portuguese TV channel TVI showed villagers in Macao trying to protect their houses and animals as smoke filled the air, forcing many to wear masks.

Around 300 firefighting vehicles are still on the ground battling the blazes, along with 20 soldiers and four bulldozers, according to the agency.

"It's a calamity here," 75-year-old resident Maria Nazare told Reuters as she watered around her brother's house in Macao. "I'm more afraid of his house than mine because his house is made of wood and he's not here."

Internal administration minister Eduardo Cabrita said police had opened an investigation on the fires, adding that local authorities considered it unusual that all the blazes had started in a narrow time frame between 2:30 pm and 3:30 pm local time (1330-1430 GMT) on Saturday in the same area.

Portugal's judiciary police have collected some evidence and artefacts that could be related to the fires' origin, an official told Lusa news agency.

In a statement, police said that a 55-year-old man was detained on suspicion of starting a blaze in the Portuguese district of Castelo Branco.

Quoted by Portuguese newspaper Observador, a police source said the detention was not related to the ongoing fires. The police did not immediately reply to a Reuters request for comment.

Several municipalities in Santarem and Castelo Branco are still considered at maximum risk of fire, according to the national meteorological agency.

Authorities hope to bring the wildfire under control by the morning but temperatures are expected to increase on Monday, reaching 38 degrees C (100.4°F) in Macao and 35 degrees C (95°F)in Vila Rei, the two most affected municipalities.

The fires' smoky clouds could be seen from the Spanish border.

On Twitter, European Commissioner for Humanitarian Aid and Crisis Management Christos Stylianides said he is following the situation closely, adding that the European Union is ready to provide help.