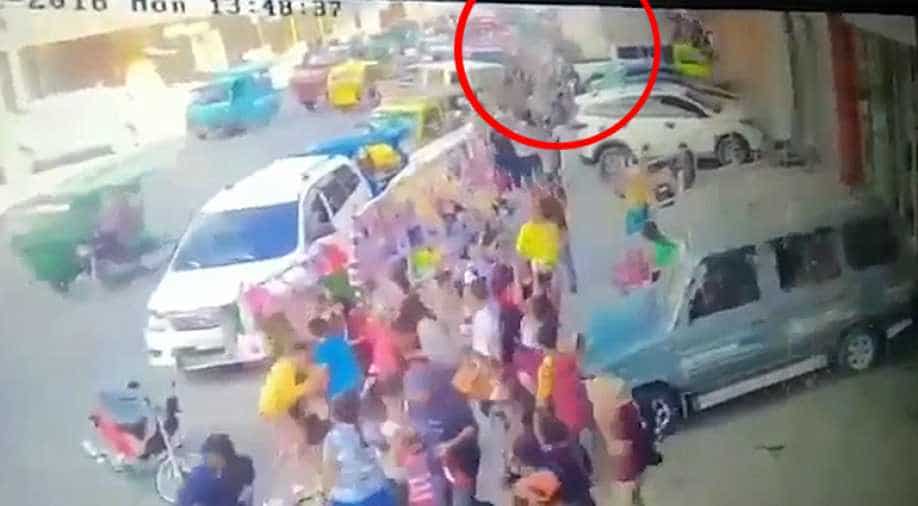 The explosion prompted officers to search the mall, leading to the discovery of another suspected bomb which they destroyed, said local police spokesman Chief Inspector Rowell Zafra.

Two men were killed and at least 32 others wounded Monday after a bomb went off outside a shopping mall in the southern Philippine city of Cotabato, police said.

The explosion prompted officers to search the mall, leading to the discovery of another suspected bomb which they destroyed, said local police spokesman Chief Inspector Rowell Zafra.

Scattered debris including items traditionally sold for New Year celebrations such as cardboard horns and gifts, as well as a bloody slipper, lay at the mall's entrance where the explosion took place.

Windows of surrounding buildings were shattered by the blast, eyewitnesses said.

Investigators could not immediately say what kind of bomb was used or name any suspects.

But Zafra said Muslim extremists who have declared allegiance to the Islamic State (IS) group in the Middle East are known to be active in areas outside Cotabato.

The southern part of the largely Catholic Philippines has been rocked for decades by violent Muslim separatist insurgent groups.

More than 100,000 lives have been claimed by the rebellion, according to a government count.

The region has also suffered from banditry, bloody feuds between powerful clans and communist guerrilla activity.

In September and August, bombs went off in Isulan town, 77 kilometres (48 miles) south of Cotabato, killing at least three people.

President Rodrigo Duterte put the southern Mindanao region under martial rule until the end of 2018 after pro-IS militants seized the city of Marawi last year.

Earlier this month, legislators approved an extension of this martial law until the end of 2019.