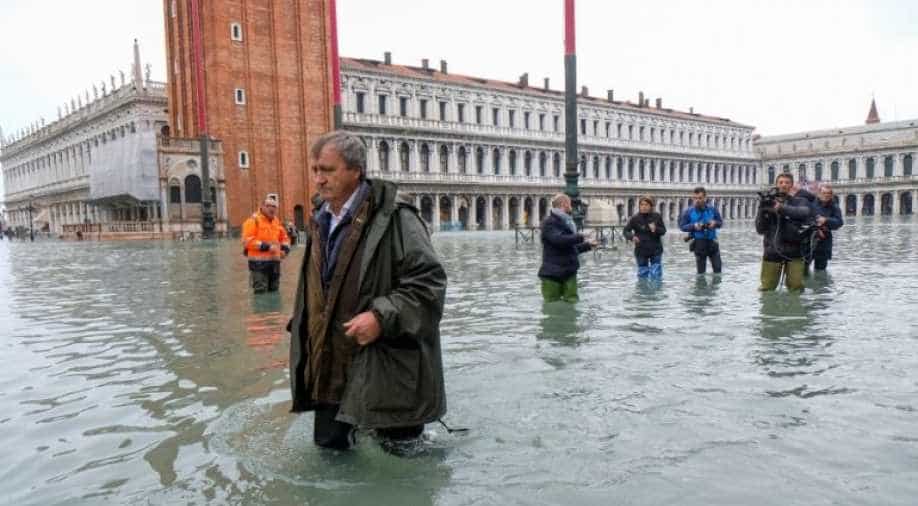 Venice's mayor declared a state of emergency on Wednesday after "apocalyptic" floods swept through the lagoon city, flooding its historic basilica and inundating squares and centuries-old buildings. Thoroughfares were turned into raging torrents, stone balustrades were shattered, boats tossed ashore and gondolas smashed against their moorings as the lagoon tide peaked at 187 cm (6ft 2ins) shortly before midnight. Photograph:( Reuters )

Venetians awoke to sirens indicating that the high waters were expected to exceed 130 centimetres (50 inches), enough to bring the salty dirty water back again into the UNESCO city's historic centre.

Venice braced itself for more rising waters on Thursday as Italy's government prepared to take emergency measures for the canal city struck by an exceptional tide this week.

Venetians awoke to sirens indicating that the high waters were expected to exceed 130 centimetres (50 inches), enough to bring the salty dirty water back again into the UNESCO city's historic centre.

On Tuesday, the highest tide in 50 years ripped through the historic Italian city, peaking at 1.87 metres (six feet).

As authorities on Thursday prepared to assess the extent of the damage to Venice's cultural treasures, such as St Mark's Basilica where water had invaded the crypt, locals remained defiant.

"It's my living, what can I do?" Stefano Gabbanoto, 54, replied when asked why he was opening his newspaper kiosk knowing he would have to close up soon.

He said he would continue to sell the colourful plastic high boots stacked in bins around the kiosk even once it was shut.

Under the arches of the Ducal Palace, a couple from Hong Kong posed for photos and video in the chilly morning sun.

"This was planned a long time ago so we couldn't change it," groom Jay Wong, 34, said. His bride, Sabrina Lee, "looks cold," he admitted.

"Actually this is a good experience," Wong said. "It's an adventure."

Prime Minister Giuseppe Conte was set to meet Venice's mayor and emergency responders before visiting businesses affected by the tide.

On Wednesday, Conte called the flooding "a blow to the heart of our country", with the government expected to declare a state of emergency over the natural disaster.

Mayor Luigi Brugnaro has estimated the damage at hundreds of millions of dollars (euros), while several museums remain closed to the public.

Tuesday's "acqua alta," or high waters, submerged around 80 per cent of the city, officials said.

A 78-year old was killed by an electric shock inside his home.

Venice is home to a mere 50,000 residents but receives 36 million global visitors each year.

A massive infrastructure project called MOSE has been underway since 2003 to protect the city, but it has been plagued by cost overruns, corruption scandals and delays.

"This engineering solution that will end up costing nearly 6 billion euros has got to work," Transport Minister Paola De Micheli said on Radio Capital.

The plan involves 78 gates that can be raised to protect Venice's lagoon during high tides -- but a recent attempt to test part of the barrier caused worrying vibrations and engineers discovered parts had rusted.