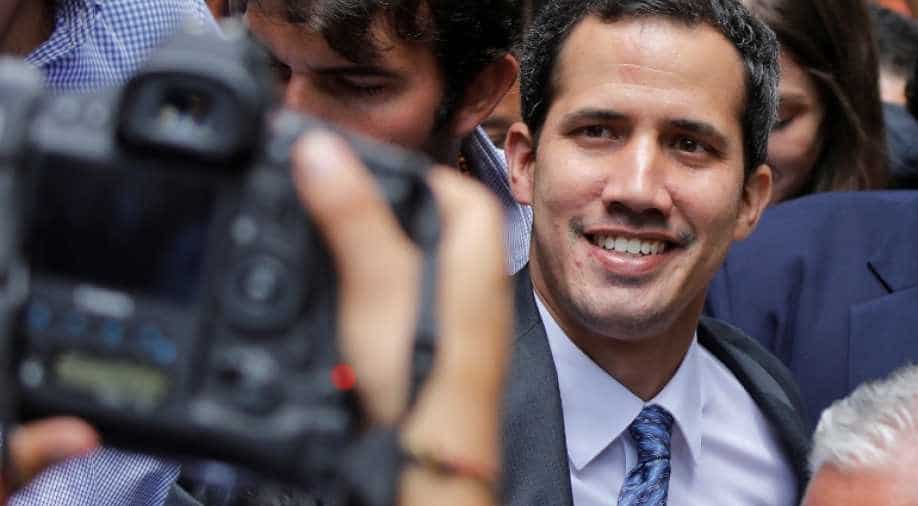 Guaido told he had sent communications to both powers, which are Venezuela's top foreign creditors and support Maduro in the UN Security Council despite worries about the cash-strapped country's ability to pay.

Global jostling intensified on Thursday between countries that want Venezuelan President Nicolas Maduro in power and those trying to force him to resign, as opposition leader Juan Guaido made overtures to his rival's allies Russia and China.

Guaido told he had sent communications to both powers, which are Venezuela's top foreign creditors and support Maduro in the UN Security Council despite worries about the cash-strapped country's ability to pay.

The 35-year-old leader argued that Russia and China's interests would be best served by switching the side they back in Venezuela, an OPEC member which has the world's largest oil reserves but is in dire financial straits.

"What most suits Russia and China is the country's stability and a change of government," Guaido said. "Maduro does not protect Venezuela, he doesn't protect anyone's investments, and he is not a good deal for those countries."

Chinese Foreign Ministry spokesman Geng Shuang, asked if China had been in touch with Guaido, said they were "maintaining close communication with all parties through various means regarding the situation in Venezuela."

China's cooperation with Venezuela was based on the principles of equality, mutual benefit and joint development, he told reporters in Beijing.

"We believe that no matter how the situation develops or changes, cooperation between China and Venezuela will not be damaged."

The intense pressure is led by the United States, which along with most other countries in the Western Hemisphere recognizes Guaido as the country's legitimate interim president, arguing that Maduro stole his second-term election.

The United States on Monday imposed sweeping sanctions on Venezuela's state-owned oil firm, aimed at pressuring Maduro to step down.

A former union leader, bus driver and foreign minister, the 56-year-old Maduro, who first took office in 2013, has faced waves of protests in recent years as he presided over hyperinflation and chronic food shortages.

Some 3 million Venezuelans have left the country. A UN expert on Thursday warned that the U.S. oil sanctions could worsen the humanitarian crisis.

With Venezuela in deep economic crisis, the geopolitical tussling has also drawn in Europe and Latin American nations as well as parts of the Middle East.

The US government warned Russia and other countries from "last-minute looting" of oil and gold on Thursday, after Reuters reported Venezuela was planning to sell gold from its central bank vaults to the United Arab Emirates in coming days in return for euros in cash, citing a senior source.

Republican U.S. Senator Marco Rubio sent a tweet to the United Arab Emirates embassy in Washington on Thursday warning that anybody transporting Venezuelan gold would be subject to U.S. sanctions.

The United States is also monitoring trade between its NATO ally Turkey and Venezuela and will take action if it judges any sanctions have been violated, a senior U.S. official said in Istanbul.

Guaido said on Thursday that agents from a feared special police unit had called at his home and asked for his wife, who was at home with their 20-month-old daughter while he was out at an event.

"Such acts of intimidation are seen as very serious, very egregious by the United States," a senior U.S. administration official told reporters on a conference call. "There will be consequences for those engaged in such acts."

Guaido appeared at his building with his wife and daughter, saying, "They will not intimidate this family." Neighbours said men who identified themselves as belonging to the Special Actions Forces arrived at the gate of Guaido's apartment building in a white SUV. There was no obvious police presence by the time journalists arrived at Guaido's house.

Maduro, who says he will remain for his second six-year term, has accused the opposition of attempting a U.S.-backed coup.

Venezuela's interior minister, Nestor Reverol, said on Thursday that security forces captured five men including a retired army colonel and other army officers on accusations of plotting a coup.

The men were captured over the last few days, Reverol said. He said they had with them two AK-47 rifles, two satellite phones and 500 bracelets bearing the symbol of Operation Constitution, a political group dedicated to toppling Maduro.

The government accuses one of the leaders of the group, retired Colonel Oswaldo García Palomo, of participating in an apparent attack at a Maduro event last yet. Garcia Palomo was among the captured men.

Maduro frequently accuses the opposition, Colombia and the United States of backing coups or assassination attempts. Such claims have usually been dismissed as a smokescreen to distract from problems at home, but a drone exploded at a Maduro event last year, in an apparent attack.

Maduro also says the opposition strategy of trying to push him from office is illegal and led by hawks in the Trump administration, such as the recently appointed US special envoy to Venezuela, Elliott Abrams, a veteran diplomat involved in the armed interventions in Central America in the 1980s.

A United Nations human rights expert denounced the US oil sanctions imposed on Monday, saying they would compound a grave humanitarian crisis.

"Coercion, whether military or economic, must never be used to seek a change in government in a sovereign state," said Idriss Jazairy, a U.N. special rapporteur studying the negative impact of sanctions.

"The use of sanctions by outside powers to overthrow an elected government is in violation of all norms of international law," he said in a statement in Geneva.

In the tussle over oil, Guaido worked this week with Washington to wrest control of PDVSA's U.S. subsidiary Citgo from its board. Citgo and Maduro's government responded by ordering dozens of Citgo's expatriate staff in the United States to return to Caracas by the end of February, people familiar with the matter said.

PDVSA has said it will pursue legal efforts to block a Citgo takeover.