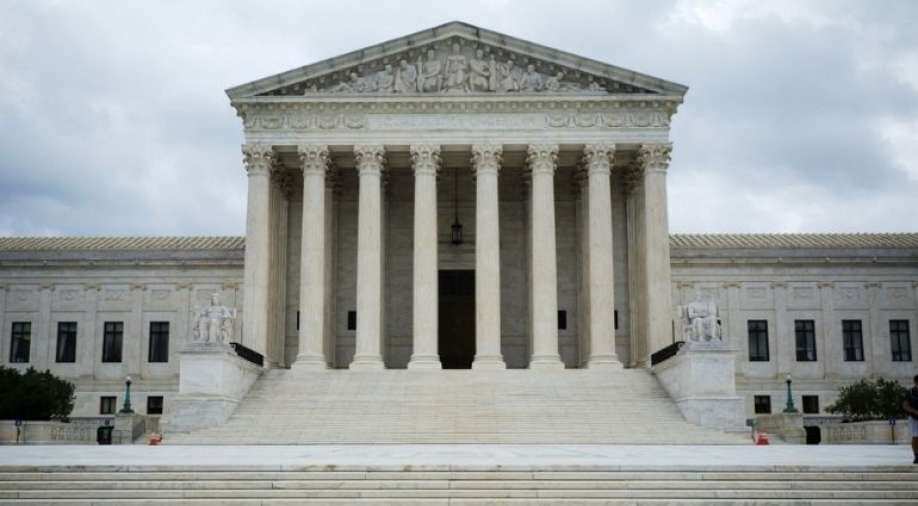 In this file photo, US Supreme Court can be seen in Washington, DC Photograph:( AFP )

In issuing the orders, the Supreme Court rejected requests by Republicans to restore maps approved by GOP-controlled state legislatures

The Supreme Court on Monday allowed congressional maps that had been approved by state courts in North Carolina and Pennsylvania to stand, giving Democrats a leg up in this year’s election in two key states.

In issuing the orders, the Supreme Court rejected requests by Republicans to restore maps approved by GOP-controlled state legislatures. Those district lines were thrown out and replaced by courts in both states after challenges by Democrats.

Under the new court-imposed maps in both states, Democrats are likely to gain more seats than they would have under the legislature-approved versions.

But in the North Carolina case, there were signs that at least four of the court’s more conservative justices could later rule that state courts are powerless to change congressional maps adopted by state legislatures.

Such a ruling would fundamentally alter how congressional elections are conducted and amplify partisan gerrymandering, allowing the party that controls the legislature to draw voting districts favoring its candidates.

But that will not happen before this fall’s election.

Stanton Jones, a lawyer for some of the plaintiffs who had challenged the North Carolina map, said the Supreme Court’s order meant that “North Carolina voters will now be able to vote in free and fair congressional elections this year.”

He said that for now, the order signaled an end to “a decade of extreme Republican gerrymanders.”

Still, the court’s three most conservative members — Justices Samuel Alito, Clarence Thomas and Neil Gorsuch — said they would have blocked the North Carolina map because it was likely that the state Supreme Court had violated the Constitution in overriding the state Legislature.

“There must be some limit on the authority of state courts to countermand actions taken by state legislatures when they are prescribing rules for the conduct of federal elections,” Alito wrote.

Justice Brett Kavanaugh filed a short concurring opinion agreeing that the question posed by the case was a substantial one. But he said the court should address it in the ordinary course rather than in response to an emergency application.

Taken together, the two opinions suggested that there are four justices ready to add a case on the question to the court’s docket when it is next presented in a petition seeking the court’s review rather than on what critics call the court’s shadow docket. It takes four votes to grant such review.

But it takes five votes to prevail. The swing vote would almost certainly belong to Justice Amy Coney Barrett.

In a second order in the Pennsylvania case, the court provisionally turned down a similar application on technical grounds without noted dissent.

The North Carolina Supreme Court had rejected a map drawn by Republican lawmakers that effectively gave their party at least 10 of the state’s 14 House seats, notwithstanding that voters statewide are roughly equally divided between the two parties.

A three-judge panel of the state Superior Court in Raleigh instead adopted a new map drawn by a nonpartisan panel of redistricting experts that appeared to split North Carolina’s congressional districts roughly equally between Republicans and Democrats. It gave each party six relatively safe House seats and made the other two competitive.

In the Pennsylvania case, the state Supreme Court adopted a map that appears to give Republicans nine fairly safe seats and Democrats eight, according to an analysis by the nonpartisan Campaign Legal Center. Each party currently holds nine House seats, but Pennsylvania will lose a seat next year because of reapportionment after the 2020 census.

Voters and a Republican candidate for the House sued state officials in federal court to challenge the new map. When they did not receive immediate relief, they asked the U.S. Supreme Court to intervene.

Both emergency applications relied on the Elections Clause of the Constitution, which says “the times, places and manner of holding elections for senators and representatives, shall be prescribed in each state by the legislature thereof.” That meant, the challengers argued, that the state legislature has sole responsibility for drawing congressional districts and that state courts have no role to play.

“The question presented here,” North Carolina Republicans wrote in their application, “goes to the very core of this nation’s democratic republic: what entity has the constitutional authority to set the rules of the road for federal elections.”

The North Carolina Supreme Court rejected that argument, sometimes called the independent state legislature doctrine, saying it was “repugnant to the sovereignty of states, the authority of state constitutions and the independence of state courts, and would produce absurd and dangerous consequences.”

But four justices of the U.S. Supreme Court have suggested that they are sympathetic to the doctrine. Three opinions issued in October 2020 seemed to endorse it.

“The provisions of the federal Constitution conferring on state legislatures, not state courts, the authority to make rules governing federal elections would be meaningless if a state court could override the rules adopted by the legislature simply by claiming that a state constitutional provision gave the courts the authority to make whatever rules it thought appropriate for the conduct of a fair election,” Alito, joined by Gorsuch and Thomas, wrote in a statement when the court refused to fast-track review of whether the Pennsylvania Supreme Court could alter deadlines for mail ballots set by the legislature.

Along the same lines, Gorsuch, joined by Kavanaugh, wrote in a concurring opinion that “the Constitution provides that state legislatures — not federal judges, not state judges, not state governors, not other state officials — bear primary responsibility for setting election rules.”

Kavanaugh, in another concurring opinion, wrote that “under the U.S. Constitution, the state courts do not have a blank check to rewrite state election laws for federal elections.”

Several Supreme Court decisions cut in the opposite direction.

In 2019, for instance, when the Supreme Court closed the doors of federal courts to claims of partisan gerrymandering in Rucho v. Common Cause, Chief Justice John Roberts, writing for the five most conservative members of the court, said state courts could continue to hear such cases — including in the context of congressional redistricting.

“Our conclusion does not condone excessive partisan gerrymandering,” he wrote. “Nor does our conclusion condemn complaints about districting to echo into a void. The states, for example, are actively addressing the issue on a number of fronts.”

He gave an example: “In 2015, the Supreme Court of Florida struck down that state’s congressional districting plan as a violation of the Fair Districts Amendment to the Florida Constitution,” adding that “provisions in state statutes and state constitutions can provide standards and guidance for state courts to apply.”

In 2015, in Arizona State Legislature v. Arizona Independent Redistricting Commission, the court ruled that Arizona’s voters were entitled to try to make the process of drawing congressional district lines less partisan by creating an independent redistricting commission notwithstanding the Elections Clause.

“Nothing in that clause instructs, nor has this court ever held, that a state legislature may prescribe regulations on the time, place and manner of holding federal elections in defiance of provisions of the state’s constitution,” Justice Ruth Bader Ginsburg, who died in 2020, wrote in the majority opinion in the 5-4 decision.