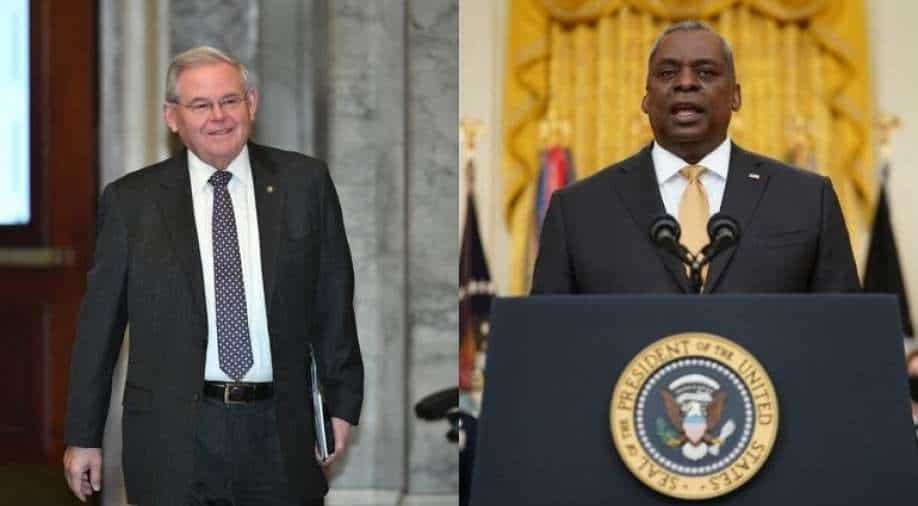 In his capacity as Chairman of the Senate Foreign Relations Committee, Menendez plays a key role in influencing the country's foreign policy and national security

US Senator Robert Menendez on Wednesday urged US Defence Secretary Lloyd Austin to talk about the ongoing farmers protest in India during his official visit to the country.

''Getting the US-India partnership right is critical to addressing 21st-century challenges, and that includes urging the Indian government to uphold democratic values and human rights,'' Senator Robert Menendez, Chairman of the powerful Senate Foreign Relations Committee, wrote in a letter to Austin.

Austin, the first-ever US defence secretary to include India on his maiden foreign trip, is scheduled to meet his counterpart Defence Minister Rajnath Singh, along with External Affairs Minister S Jaishankar and National Security Advisor Ajit K Doval, during his New Delhi visit from March 19 to 21.

''In meetings with Indian counterparts during your upcoming visit, I strongly encourage you to make clear that in all areas, including security cooperation, the US-India partnership must rest on adherence to democratic values,'' Menendez said in his letter, a copy of which was released to the press on Wednesday.

In his capacity as Chairman of the Senate Foreign Relations Committee, Menendez plays a key role in influencing the country's foreign policy and national security. Among his predecessors include President Joe Biden, who occupied this position during former president George Bush's administration and former secretary of state John Kerry.

''The Indian government's ongoing crackdown on farmers peacefully protesting new farming laws and corresponding intimidation of journalists and government critics only underscores the deteriorating situation of democracy in India,'' he wrote.

Indian Defence Minister Rajnath Singh had said that the government was ready for another round of talks.

India's foreign ministry had slammed international celebrities for making comments in support of protesting farmers as inaccurate and irresponsible and said vested interest groups were trying to build opinion against the country.

"Before rushing to comment on such matters, we would urge that the facts be ascertained, and a proper understanding of the issues at hand be undertaken," it said in a statement.

The US Senate was unable to curb the misinformation and conspiracies fueled by Trump supporters which led to the US Capitol riots.

While Twitter blocked Trump's account citing a violation of its policy, in the case of farmers protest in India, the social networking platform did not curtail any false claims.

Protesters broke barricades to enter New Delhi and clashed with police in several parts of the national capital during the January 26 'tractor rally' protest organised by farmers.

Police responded by shutting down roads to prevent farmers from entering the capital again.

Governments across the globe have the right to ensure that protests don't descend into chaos and they do not get hijacked by vested interests.

In 2015, Robert Menendez was among the few senate democrats to oppose the Iran deal saying that ''if Iran is to acquire a nuclear bomb, it will not have my name on it.''

However, during the Trump administration, Menendez was indicted for bribery as he took gifts and money from a doctor in return for using the powers of his senate office to benefit the said doctor's personal interests.