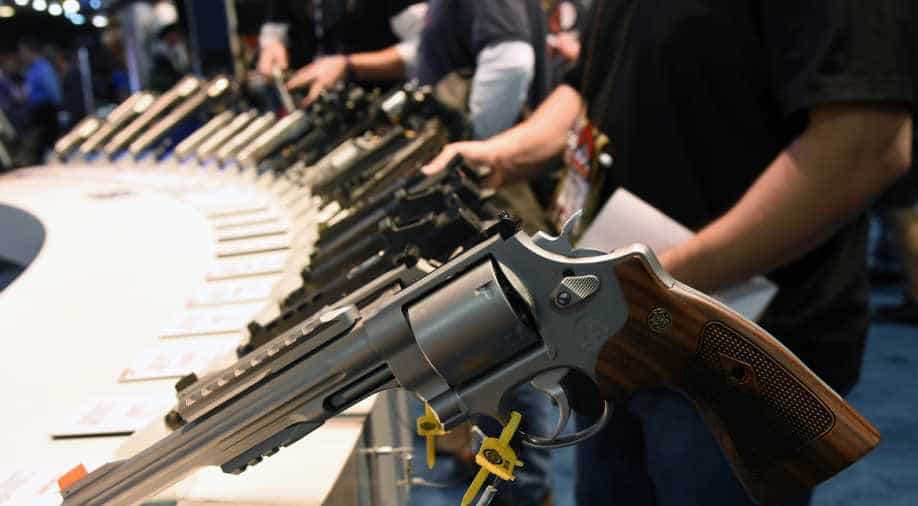 Last week's massacre, the second-deadliest shooting at a public school in US history, has inflamed a national debate about gun rights Photograph:( Getty )

Follow Us
The Republican-controlled US House of Representatives, under mounting pressure to advance gun-control legislation, will vote next week on a measure to keep guns out of the hands of people on government terrorism watch lists.

Republican and gun lobby sources said the legislation, due to be introduced as part of a terrorism package, was likely to be a National Rifle Association (NRA)-backed bill brought by Representative Lee Zeldin of New York as the companion to a Senate Republican measure from senator John Cornyn of Texas.

House Democrats, who last week staged a 25-hour sit-in on the House floor to push for gun control after the June 12 mass shooting in Orlando, condemned the Cornyn-Zeldin measure as the handiwork of the NRA. Senate Democrats blocked the same legislation last week.

"House Democrats will keep up our efforts to push for the majority to allow a vote on gun violence legislation, but bringing up a bill authored by the NRA just isn't going to cut it," said Drew Hammill, an aide to House Democratic leader Nancy Pelosi. The NRA denied writing the legislation.

House speaker Paul Ryan announced the plan in a conference call with lawmakers. Republican leadership aides declined to provide details. One said the package was still being negotiated.

After the Orlando, Florida, shooting that killed 49 people and wounded 53 more at a gay nightclub, gun-control proponents ratcheted up pressure for meaningful legislation.

"We are going to get something done this year, I predict," Senate Democratic leader Harry Reid told reporters. "I think we’re going to take a bite out of the NRA."

Reid said he was hopeful for a bill introduced by Republican senator Susan Collins of Maine, and a bipartisan House companion bill backed by Republicans including representative Carlos Curbelo of Florida, to prevent gun sales to anyone on the government's "No Fly List" for terrorism suspects or the "Selectee List" for extra airport screening.

Before Thursday's announcement, representative Bob Dold of Illinois, a Republican backer of the Collins-Curbelo bill, urged Ryan and House majority Leader Kevin McCarthy to opt for the bipartisan measure, according to a Dold aide.

But hopes for a vote on that measure could be dashed if House Republicans move first on the Cornyn-Zeldin bill, which would allow party leaders to say they had acted on gun control.

"It would really be a sharp blow," said Representative Scott Rigell, a Virginia Republican and NRA member who supports the Collins-Curbelo measure.

The NRA-backed measure would give officials three days to decide whether a gun sale should be blocked. Democrats argue the timetable is insufficient and say the government would have to persuade a court that a would-be buyer "has committed or will commit an act of terrorism" before it could block a gun sale.

Under the Collins-Curbelo bills, a court would have 14 days to decide on appeals.