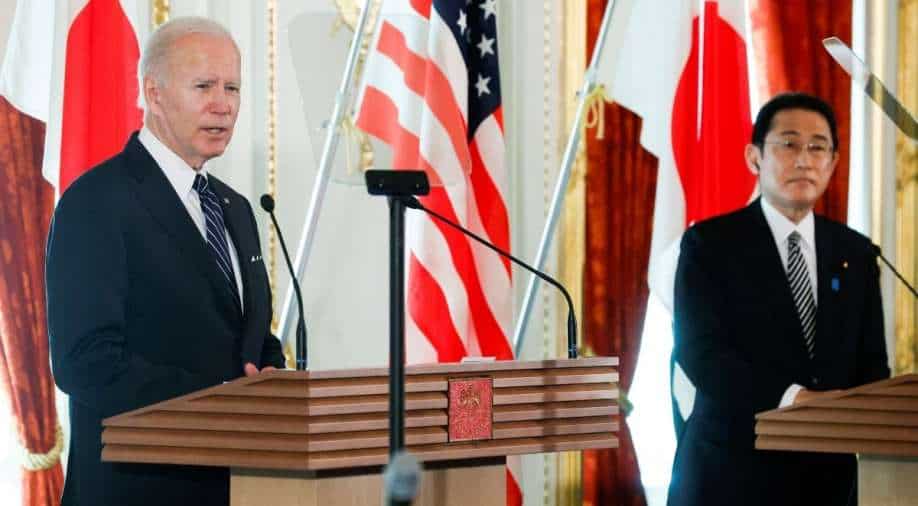 US President Joe Biden speaks during a joint news conference with Japan's Prime Minister Fumio Kishida after their bilateral meeting at Akasaka Palace in Tokyo, Japan, May 23, 2022. Photograph:( Reuters )

At a press conference, Biden said that "the United States and Japan, together with 11 other nations will be launching" the Indo-Pacific Economic Framework for Prosperity

United States President Joe Biden on Monday (May 23) said that 13 countries have joined a new, US-led Asia-Pacific trade initiative. The alliance is deemed a counterweight to China's aggressive expansion in the region.

Biden embarked on an East Asia trip where he visited South Korea and then arrived in Japan to attend the four-nation Quad summit, which is scheduled to take place on Tuesday (May 24).

Ahead of the Quad summit in Tokyo, Biden launched Indo-Pacific Economic Framework (IPEF) in the Japanese capital in the presence of Japanese Prime Minister Kishida Fumio.

At a press conference alongside the Japanese PM, Biden said, "The United States and Japan, together with 11 other nations will be launching" the Indo-Pacific Economic Framework for Prosperity.

Biden added, "This framework is a commitment to working with our close friends and partners in the region on challenges that matter most to ensuring economic competitiveness in the 21st century".

List of countries who will be 'initial partners' of the US-led Indo-Pacific Economic Framework released:

As per the US, the deal will provide a way to sort through key issues from climate change to supply chain resilience and digital trade to the countries that join. Although, the deal doesn't offer tariff relief or market access to the countries.

The framework will help countries together to negotiate the various aspects of trade and also to discuss how to consider potential future members, including China, which is not taking part, officials told reporters. Taiwan was also left out of the initial talks.