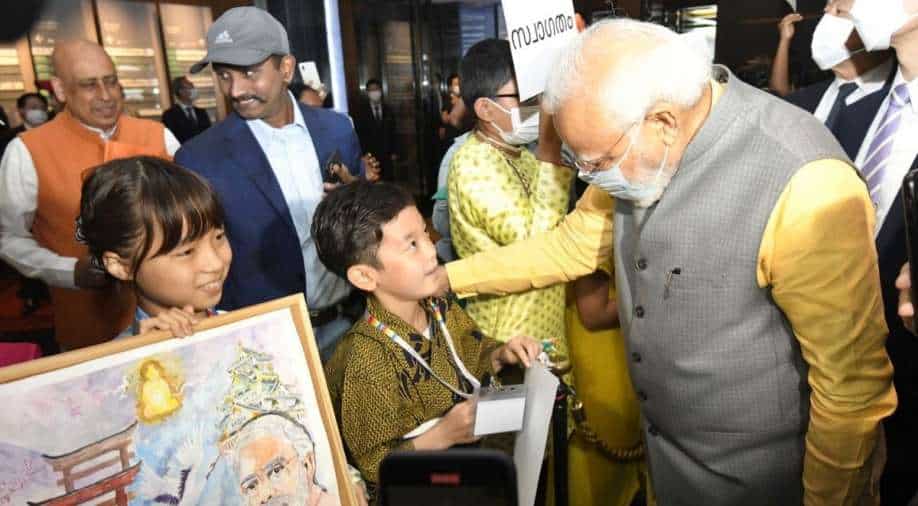 In Tokyo, PM Modi will be taking part in various programmes including the summit and meeting other Quad leaders

Indian Prime Minister Narendra Modi arrived in Japan Monday morning (May 23) to attend the Quad summit at the invitation of Japanese Prime Minister Fumio Kishida. The summit is scheduled to take place on Tuesday. PM Modi noted that during his two-day visit, he will be taking part in various programmes including the summit and meeting other Quad leaders. He will also interact with Japanese business leaders and the Indian diaspora.

Upon his arrival, the Indian Prime Minister interacted with children who were outside Hotel New Otani to welcome him. During the interaction, PM Modi looked impressed when a kid named Ritsuki Kobayashi spoke Hindi fluently while asking for his autograph.

PM Modi said, "Waah! Where did you learn Hindi from?... You know it pretty well?"

Later, while interacting with India-based news agency ANI, Kobayashi said, "He [PM Modi] read my message, which I wrote on paper and this is the reason that I am very happy and even I got his signature."

#WATCH | "Waah! Where did you learn Hindi from?... You know it pretty well?," PM Modi to Japanese kids who were awaiting his autograph with Indian kids on his arrival at a hotel in Tokyo, Japan pic.twitter.com/xbNRlSUjik

Japan’s Indian community has made pioneering contributions in different fields. They have also remained connected with their roots in India. I thank the Indian diaspora in Japan for the warm welcome. pic.twitter.com/cfMCzM4XVf

Ahead of his visit to Japan, PM Modi on Sunday said that during the Quad summit, leaders will once again have the opportunity to discuss various initiatives and issues of mutual interest.

The Quadrilateral Security Dialogue or Quad is a strategic security dialogue between Australia, India, Japan, and the United States.