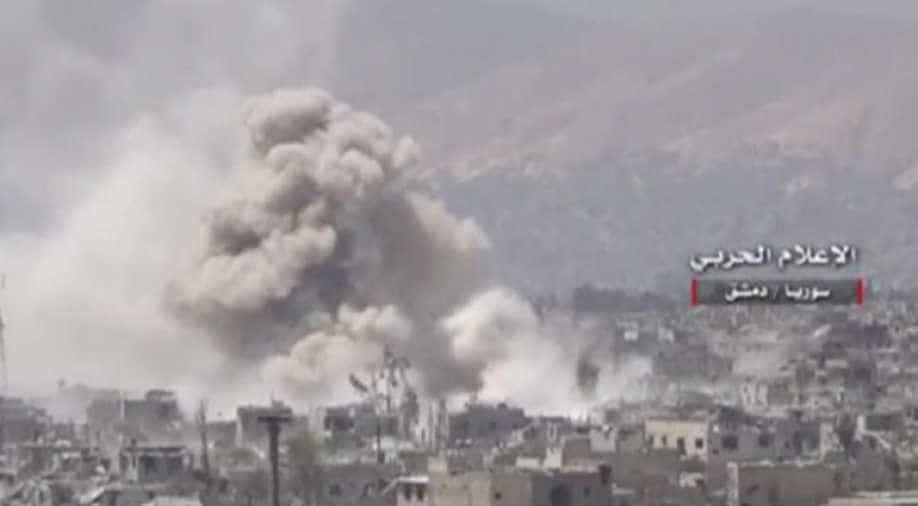 The Britain-based monitor this week reported the highest monthly civilian death toll for the coalition since it began bombing Syria on September 23, 2014. Photograph:( Reuters )

The Syrian Observatory for Human Rights said the strikes hit a series of residential buildings in Mayadeen, a town in Syria's oil-rich eastern province of Deir Ezzor.

"Among the dead are at least 26 relatives of IS fighters, many of them women and children, including Syrians and Moroccans," said Observatory head Rami Abdel Rahman.

"The other nine are Syrian civilians and include five children," Abdel Rahman told AFP.

Thursday's toll brought the known deaths from two days of coalition bombing raids on Mayadeen to 50, the Observatory said, after 15 people were killed in US-led strikes on the town on Wednesday.

The Britain-based monitor this week reported the highest monthly civilian death toll for the coalition since it began bombing Syria on September 23, 2014.

Between April 23 and May 23 of this year, coalition strikes killed a total of 225 civilians in Syria, the Observatory said.

On Thursday, a Pentagon investigation concluded that at least 105 civilians died in an anti-jihadist air strike on an IS weapons cache in Mosul in March.

Prior to the new relevation, the US military had said coalition air strikes in Iraq and Syria had "unintentionally" killed a total of 352 civilians since 2014.

More than 320,000 people have been killed and millions more displaced since Syria's conflict broke out in March 2011.