US, Japan showcase alliance, resolve in dealing with aggressive China 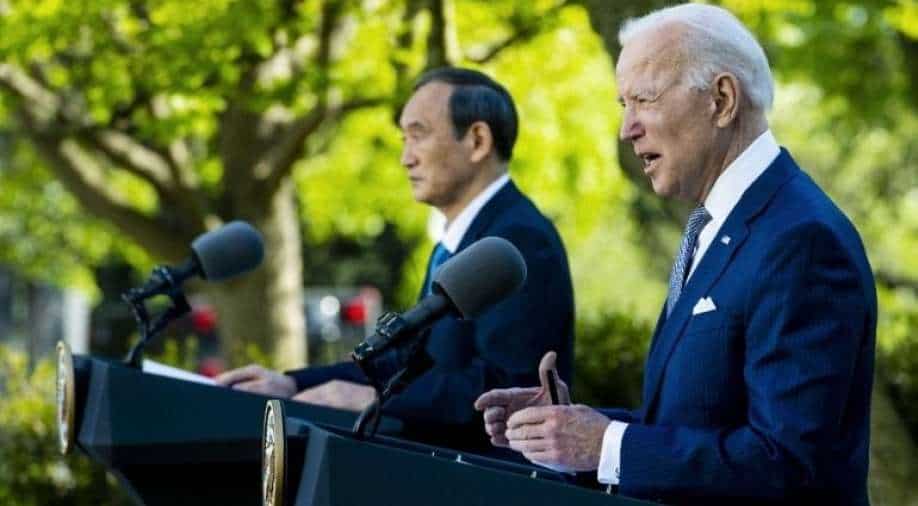 US President Joe Biden and Prime Minister Yoshihide Suga of Japan hold a news conference in the Rose Garden of the White House on Saturday in Washington, DC. Photograph:( AFP )

President Joe Biden and Japan Prime Minister Yoshihide Suga showcased the alliance between their two countries as well as their shared resolve in dealing with China as they met at the White House on Friday in Biden's first face-to-face talks with a foreign leader as president.

The talks featured unusually frank warnings from a Japanese leader against any effort by China to dominate the Indo-Pacific region by 'force or coercion’.

Suga said the visit was meant to ‘reaffirm the new and tight bond between us' as the US and Japan deal with challenges in the region.

Suga and Biden, who wore masks for their meeting in a visit modified by precautions against the coronavirus, were seeking to challenge messaging from Chinese President Xi Jinping that America and democracies in general are on the decline following the political turmoil and international withdrawal that marked Donald Trump's presidency.

In a news conference afterward in the Rose Garden, Suga made repeated references to the 'severe security environment' in East Asia, where China under Xi is exerting its economic and military strength, including with military deployments meant to assert its disputed territorial claims in the region.

Suga broke from past Japanese leaders on Friday by not veiling his comments about China, an important economic partner for Japan.

The prime minister said he and Biden held 'serious talks on China's influence over the peace and prosperity of the Indo-Pacific. We oppose any attempt to change the status quo by force or coercion.'

Chinese Foreign Minister Wang Yi had warned his Japanese counterpart in a call ahead of Suga's visit to see to it that China-Japan relations 'do not get involved in the so-called confrontation between major countries,' according to a Chinese government readout.