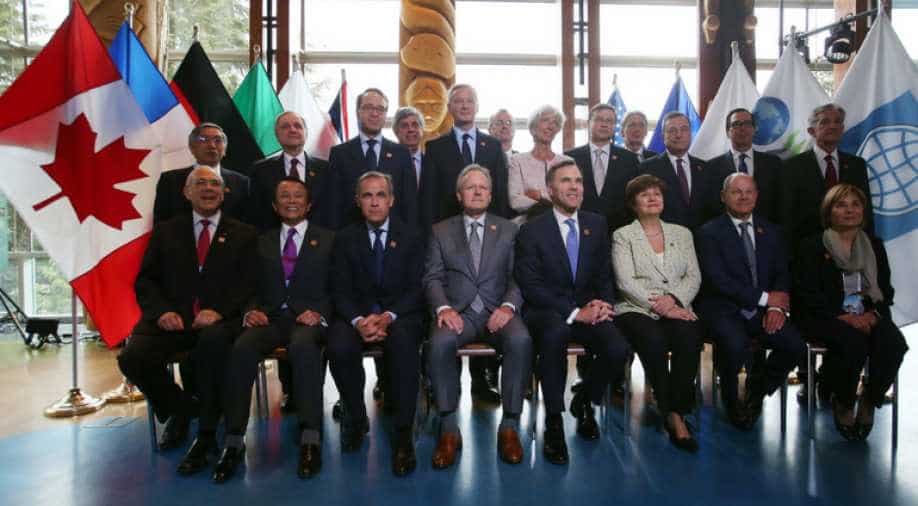 Delegates pose for an official photo at the G7 Finance Ministers Summit in Whistler, British Columbia, Canada. Photograph:(Reuters)
Follow Us

Washington's main allies delivered a unified message of shock and dismay at a Group of Seven ministerial meeting on Saturday, urging US President Donald Trump to rescind punishing metal tariffs.

The lack of common ground meant the dispute would continue into next week's G7 summit in Quebec, Canada, where Trump is expected to face other heads of state as the global economy verges on outright trade conflict.

At this snow-capped mountain resort north of Vancouver, British Columbia, US Treasury Secretary Steven Mnuchin was the odd man out.

One after another, finance ministers and central bankers spoke of exasperation and an abiding sense of betrayal by a longtime ally.

Mnuchin, however, downplayed the disagreements and said the United States was committed to the G7 process.

Announcing the meeting's close, Canadian Finance Minister Bill Morneau said the host government and five others had urged Mnuchin to relay their "unanimous concern and disappointment."

"We said that we were collectively hoping that he would bring the message back of regret and disappointment at the American actions and concern that they are not constructive," said Morneau.

"I want to make it clear," Le Maire said, "that it is up to the US administration to make the right decisions to alleviate the situation and ease the difficulties."

Avoiding trade war "will depend on the decision the (US) administration is ready to take in the next few days and in the next few hours -- I'm not talking about weeks ahead," he added.

"No one understands that due to security reasons there should be extra tariffs on steel and aluminum," he said.

Trump's tariffs on America's largest foreign providers of the crucial metals that went into effect Friday upended the agenda for this normally convivial event for consensus-building among countries that account for about half of global GDP.

No joint final statement emerged from the G7 ministerial meeting, a sign of the strong discord now at the heart of the global economy.

How the White House would deal with this remained unclear.

As the ministers' meet ended, Trump was as bellicose as ever, taking to Twitter to denounce "stupid trade" in which he said the US saw foreign tariffs on its exports without responding in kind.

"When you're almost 800 Billion Dollars a year down on Trade, you can't lose a Trade War! The US has been ripped off by other countries for years on Trade, time to get smart!" he wrote.

Counting trade in both goods and services, the US trade deficit was $566 billion in 2017, a 12 percent increase marking its highest level since the 2008 Great Recession.

Getting an earful from allies

Chairing a meeting on Friday, Morneau allowed participants to register grievances with Mnuchin one at a time, according to a Canadian source.

Behind closed doors, sources briefed on the talks said Mnuchin listened but spoke little, saying instead the discussion could continue at next week's G7 summit in the French-speaking province of Quebec at which Trump is expected to participate.

Mnuchin said he had informed Trump of his discussions but that trade was only one of many issues on a full agenda.

"I believe there was a comment out there that this was the G6 plus one. It was not. This was the G7. We believe in the G7."

The week's whirlwind global developments in trade suggested a quick de-escalation was unlikely.

Trump has suggested the 24-year-old North American Free Trade Agreement might be scrapped in favor of seeking bilateral agreements with Canada and Mexico.

G7 governments were also digesting Trump's threats to impose tariffs on hundreds of billions of dollars in US auto imports on purported national security grounds.

In China, US Commerce Secretary Wilbur Ross was due to conduct trade talks with Chinese officials even as Washington finalizes planned sanctions on Beijing.

Potential measures include restrictions on Chinese investment in the United States, new export controls and 25 percent tariffs on about $50 billion in tech-sector goods.

The talks come despite the Trump administration's apparent announcement last month of a truce with Beijing following talks in Washington last month.

China has threatened to hit back with tit-for-tat tariffs on tens of billions of dollars in US goods -- as have Canadian, EU and Mexican authorities.