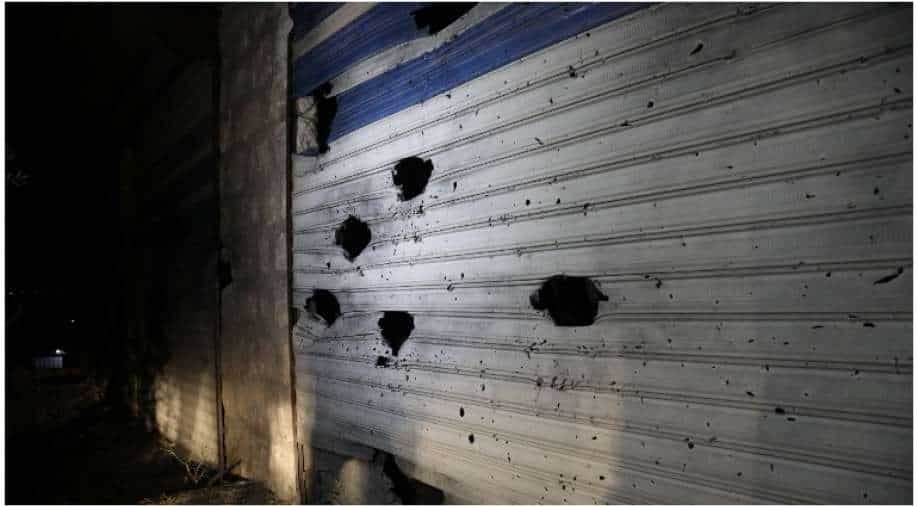 A damaged shutter is seen on a building in the aftermath of a counter-terrorism mission conducted by the U.S. Special Operations Forces in Atmeh, Syria, February 3, 2022 Photograph:( Reuters )

Pentagon has not named the jihadist who was targetted. A number of jihadist groups with links to al Qaeda operate in northwestern Syria, the last major bastion of rebels fighting President Bashar al-Assad in the decade-long Syrian war. Leaders of the Islamic State group have also hidden out in the area

US special forces carried out a counter-terrorism mission in Syria on Thursday. The Pentagon said that the raid, carried out in northwest Syria was successful. Syrian sources were quoted by Reuters to say that the raid was aimed at an Al Queada-linked jihadist.

At least 13 people, including six children and four women were killed in the clashes, said Syrian rescue workers. The raid targetted a house in the Atmeh area near the Turkish border

"US Special Operations forces under the control of U.S. Central Command conducted a counter-terrorism mission this evening in northwest Syria. The mission was successful," Pentagon Press Secretary John Kirby said in a statement.

"There were no U.S. casualties. More information will be provided as it becomes available."

He did not identify the target.

A number of jihadist groups with links to al Qaeda operate in northwestern Syria, the last major bastion of rebels fighting President Bashar al-Assad in the decade-long Syrian war. Leaders of the Islamic State group have also hidden out in the area.

Several rebel sources said they were almost certain the target was a leading jihadist, but could not be sure who.

Residents said helicopters landed and heavy gunfire and explosions were heard during the raid that began around midnight. U.S. forces used loud speakers to warn women and children to leave the area, they said.

A video taken by a resident and seen by Reuters showed the bodies of two apparently lifeless children and a man in the rubble of a building at the location.

A witness who lives nearby said he saw several bodies at the scene. "There was blood everywhere," he told Reuters. He added that one of the U.S. helicopters appeared to suffer a mechanical failure and was blown up by the U.S. forces.

A rebel official who declined to be named said the jihadist who was the apparent target of the raid was with his family at the time.

Witnesses said the raid ended with aircraft, believed to be helicopters, leaving the site but unidentified reconnaissance planes were still hovering in the area.